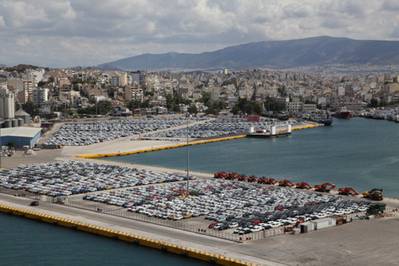 China wants to invest in Greek airports and railways as well as the busiest port, officials said on Friday, as the country where the euro debt crisis began seeks a role as China's gateway into Europe.

Chinese Premier Li Keqiang is on a three-day trip to Greece to boost economic ties between the nations, who have drawn closer since China's Cosco Paficic won a 35-year concession in 2009 to upgrade and run two cargo piers at the Piraeus port.

Greece, which relies on bailout loans from the European Union and the International Monetary Fund, desperately needs foreign investment to spur growth and create jobs as it struggles to exit a six-year recession.

China - which has already submitted a bid to buy a majority stake in Piraeus - is also eyeing the construction of a new 800-million-euro airport in Crete, and the main airport in Athens when the government puts it on sale later this year, Greek officials said. Development Minister Nikos Dendias said the two sides also discussed a high-speed rail project.

"Greece, apart from a sea trade gateway, can also become a transit hub for air transport," Greek Prime Minister Antonis Samaras said. "Ports but also airports, such as the Athens International Airport and the International Airport in Heraklion in Kasteli, are the object of Chinese interest."

Both sides have sought to play up Greece's strategic location at the crossroads of Europe, Asia and Africa, saying the country could become a hub for channelling goods from the world's second-largest economy and top exporter into Europe.

"Piraeus port can become a gateway of China to Europe," Li said during a visit to Cosco's facilities at Piraeus.

Li, who on Thursday promised Greeks his country would remain a "long-term investor" in Greek bonds, on Friday said China would encourage its businesses to cooperate with Greek companies in the ship repair sector.

Greece has the largest shipping fleet in the world, and Greek shipowners transport about 60 percent of China's imported oil and more than half of its exported goods, Greek Shipping Minister Militiadis Varvitsiotis said.

China has been steadily ratcheting up its interest in Greek assets in recent years.

Cosco Pacific has said it wants to turn Piraeus into a regional hub and sought to expand port facilities and construct an oil refuelling jetty, a 230-million euro ($314 million) investment which needs to be approved by the European Comission.

Cosco has also expressed interest in acquiring a 67 percent stake at the port.

This is the second time a Chinese Premier has visited Greece since Athens acknowledged in 2009 that its finances were in deep trouble.

"The affair between the two economies started in 2004-2008. In 2010 the appetite for trade cooperation was official and now, in 2014, we see that there is a strong will to make it deeper," George Xyradakis, an adviser to the China Development Bank in Greece, told Reuters.