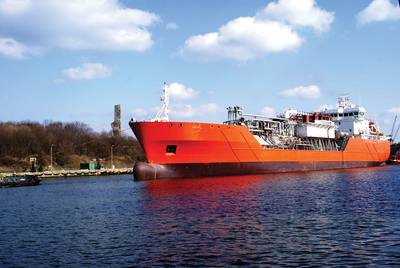 When sail gave way to steam, the British Royal Navy dominated global maritime trade routes. It had the power and outreach to build a global chain of coaling stations for its warships. The availability of steam coal at strategic points gave commercial shipowners the confidence to order coal-powered steamships and the transition from sail to steam was very quick. Unfortunately for backers of LNG power for ships, there is no Navy today with the sort of scope and reach enjoyed by the British in their heyday. Doubts over LNG bunker availability are holding back what many claim should be a quick switch from diesel to gas power for large chunks of the global merchant fleet.

Environmental Benefits vs. Logistics
“The benefits in terms of improved environmental performance and lower costs of LNG power are well known now,” says Andrea Cogliolo, head of innovation at Italy’s RINA Group. “The technology is well proven too, and there are over thirty ships with LNG power in operation. Class and yards and engine builders are ready to go with gas-fueled designs. Gas prices are likely to fall further, as massive new gas discoveries combine with shale gas to increase global gas supply. The gas price in the US has fallen sharply already to levels which look very attractive for powering ships. But we are not yet seeing a dash for gas, because owners cannot yet answer the one simple question – Where can I bunker my vessel?”
If you are Norwegian the answer is simple, LNG bunkers is available at fixed points and by road truck in Norway. This explains why the 33 ships with LNG power today are all operating around the Norwegian coast. A further 20 or so LNG-powered ships are on order, but they are mostly ferries for short, fixed routes where LNG bunkers can be built in as part of the investment in the route. There are reports of an LNG-powered bulk carrier being ordered in China, but most owners need to see a solid global LNG bunker chain before they can invest in LNG power.
“There are two aspects to the LNG bunkering question,” says Cogliolo. “One is how you do it; the other is where you do it. Unlike oil, which is relatively simple to store, transport and handle, these two questions have a number of complex answers when we begin to examine how to develop an LNG bunker chain.”

Regulatory Uncertainty: Port Safety
Before LNG bunkering can even address technical and logistic questions, it has to overcome regulatory uncertainty. “We have the rules in place for gas-fueled ships,” says Cogliolo. “But we can’t make rules for ports. LNG as fuel is not covered by national or international regulations and only IMO non-binding guidelines are available. The IMO IGF Code is still under development and is unlikely to be in place before 2014. Class can fill the gap until then for ships, but there are many doubts over local rules in ports and local authorities. There may be traffic limitations on LNG-fueled ships in some ports and possible prohibition of simultaneous commercial operations during refueling.”
As ports move to install LNG bunker facilities, they also should consider the need for LNG tanks with loading arms or a system whereby LNG is to be provided by LNG bunker barges or by LNG tank trucks. “Permits for this infrastructure by national and local authorities are generally based on the production of a safety case and this is a lengthy process,” explains Cogliolo. “This can be based on the proven experience to date, especially in Norway, and the guidelines in the draft IMO IGF Code, SIGTTO STS Transfer Guide and  ISO 28460 (2011) for LNG ship-shore interface and port operations. Some LNG complications not needed with oil bunker stations could include safety distances and exclusion zones for workers and public in port areas, the possible need of quick release mooring hooks on terminals and problems with LNG venting which could be prohibited on environmental grounds. Couplings must minimize the LNG release upon connection and disconnection.”
There are different solutions to the LNG supply problem, which could involve tank truck or containers of LNG which are physically loaded onto the ship and exchanged when empty, tank trucks to supply the ship via hose, terminal or storage depot hose to ship or ship to ship transfer. There are already examples of each of these systems in operation, and any future LNG bunker chain will involve a mix of the methods. “In Norway so far most bunkering of LNG is by tank truck or from smaller LNG storage terminals, usually with flexible cryogenic hoses but also in some places with LNG loading arms. My expectation is that we will see a lot more small LNG bunker tankers doing ship-to-ship transfer as investment in LNG-fueled ships begins to look more attractive,” says Cogliolo. He adds, “Some of these small LNG tankers have already been built and are in operation. They can deliver the volumes needed quickly and they get round many local storage and local port issues by operating outside the port.”

Global Issues: Local Solutions
While RINA is a global classification society, its backyard is the Mediterranean. There, it is active in helping Italy to develop as an LNG importing and distribution hub for Europe. “We want to use our expertise with the world’s first offshore LNG terminals to help develop an LNG bunker chain in the Mediterranean area,” says Cogliolo. “If we can help Mediterranean fixed route shipping like ferries to switch to LNG that will go a long way to improving air quality in this area. If we can give deep sea owners confidence that they can bunker LNG during a Mediterranean voyage or transit then we will also have helped the ‘chicken and egg’ situation which is holding back the switch to LNG fuel.”
RINA is also coordinating the COSTA project (CO2 & Ship Transport emissions Abatement by LNG) which is partly funded by the EU and which is tasked with identifying the obstacles to LNG adoption in the Mediterranean and near Atlantic and drawing up an LNG master plan for implementation of an LNG bunker chain. The COSTA project links governments, port authorities and industrial players around the Mediterranean including Italian shipowners Grimaldi and Grandi Navi Veloci and the maritime administrations of Italy, Greece, Spain and Portugal.
“The European Commission may not have the power the Royal Navy once had,” says Cogliolo. “But they are doing all they can to facilitate LNG bunkering development, in the Mediterranean and also in the Baltic area. The COSTA project will learn from the Baltic and Norwegian experience and also look at the feasibility of Europe’s Atlantic islands including the Madeira and the Azores becoming transatlantic LNG bunkering stations. The project will be completed by 2014, just before ECA limits in both Europe and the US coastal areas cut permissible sulphur emissions to 0.1 per cent. The high cost of clean residual fuel and the lower cost of gas will be a big incentive to move forward. We have a large chain of LNG terminals already in the Mediterranean. Our next move has to be to find common standards which all these terminals can adopt and so move forward to build the bunker chain shipping needs to make this transition to cleaner and cheaper fuel.”

(As published in the 3Q edition of Maritime Professional - www.marinelink.com)