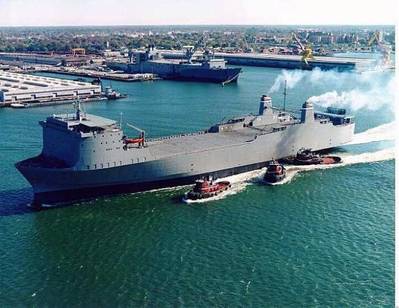 “When Syria has completed removal of its chemical materials, MV Cape Ray will depart Rota and proceed to the transloading port in Italy, where she will take the chemicals on board,” Warren said in a statement announcing the vessel’s arrival in Spain. “Our ship is prepared and our crew is trained to safely neutralize Syria's chemical materials. We stand ready to fulfill our contributions to this international effort; it is time for Syria to live up to their obligations to the international community."

By offering Rota for a port of call before MV Cape Ray receives a load of chemical materials and embarks on the destruction phase of its mission, Spain is making a contribution to the United Nations-sanctioned multinational effort to rid Syria of its chemical weapons materials, officials at the U.S. Embassy in Madrid said.

Defense Secretary Chuck Hagel sent a message to the Cape Ray’s crew, wishing them well as they left Portsmouth. “As you all know, your task will not be easy,” Hagel wrote. “Your days will be long and rigorous. But your hard work, preparation and dedication will make the difference.