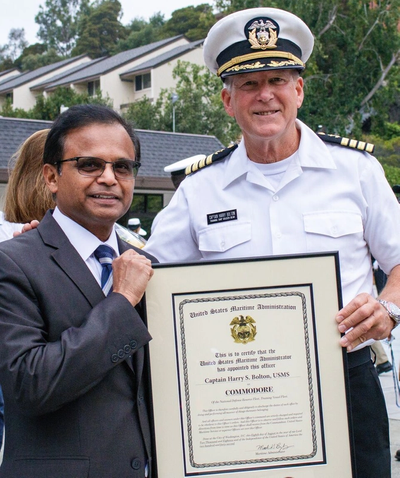 After 10 years at the helm, Harry Bolton handed over command of the Training Ship Golden Bear Wednesday at California State University Maritime Academy.

Bolton, a 1978 graduate of the Academy, returned to Cal Maritime on May 1, 2008 after a 30-year career with American Maritime Officers. Twenty of those years were with American Overseas Marine Corporation (AMSEA) aboard the original preposition ships based out of Guam, Saipan and Diego Garcia. Bolton began sailing as Master in 1985, only seven years after graduation.

Pecota has served as Cal Maritime's academic dean since 2015, leading a transition to reorganize the Academy's academic programs under three distinct schools, creating a more efficient and effective academic administration and supporting the growth of the University.

Pecota joined the faculty at Cal Maritime in 2001 in the department of Marine Transportation. His specialties are marine electronics and the development of new maritime educational and training pedagogies with special emphasis on practice-based learning through simulation.

He is the author of the textbook Radar Observer Manual (6th Ed., 2006) and numerous technical papers on e-Navigation which have been delivered at international conferences.

Pecota served as chair of the Marine Transportation Department from 2009-2011. In 2013, he was awarded the title of distinguished professor in recognition of his research and scholarly work at Cal Maritime. In 2014, he served as the chair of e-Navigation Underway North America, an international conference dealing with the latest developments in marine navigation equipment and vessel control systems, held on the Cal Maritime campus.

At the Academy, he has also served as director of simulation since 2013, and relief master of the Training Ship Golden Bear since 2011. Since 2014, he has served as a council member of the Nautical Institute, the governing body of the international organization for maritime professionals, based in London, England.

Pecota graduated from the United States Merchant Marine Academy at Kings Point, New York in 1980. He spent 20 years as a merchant officer, working his way up from 3rd mate to master. He served as captain aboard the MV Stuyvesant from 1989 until 2000. Pecota earned a master's degree in Transportation Management from American Military University in 2005.

Each summer, Cal Maritime cadets who are working to earn a U.S. Coast Guard license in addition to a bachelor's degree depart the Academy's Vallejo campus for a two-month, international training cruise. For the duration of the cruise, Cal Maritime cadets are responsible for running the ship, including navigating and driving, repairing and overseeing the engines, and maintaining the vessel. The cruises are supervised by the ship's captain, along with the chief engineer, faculty members, and a team of experienced mariners.