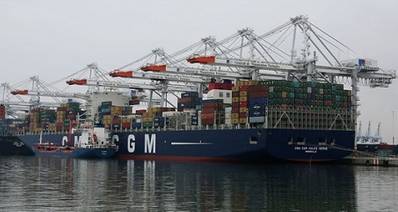 The U.S. Federal Maritime Commission Chairman, Mario Cordero, issued a call to fellow regulators in the European Union and the People’s Republic of China, to join with him in a Global Regulatory Summit on the proposed P3 Global Alliance of the world’s three largest container carriers, Maersk Line, CMA-CGM, and Mediterranean Shipping. The Summit would take place in Washington, D.C., with regulators to discuss their respective regulatory roles in considering the impact of the announced Alliance.

The three carriers announced they would begin cooperating in 2014 on routes covering Asia to Europe as well as transpacific and transatlantic routes to the United States. Early estimates by Maersk Line’s chief trading and marketing officer put market control of such an alliance at about 42% on the Asia to Europe route, 24% on the transpacific routes, and 40-42% on the transatlantic route. Indications are that the P3 network will be operated from new management offices in London and Singapore with a staff of approximately 200. The proposed Alliance has already named Maersk Line’s Lars Mikel Jensen as its Chief Executive Officer.

Joining in the call for the Summit is Commissioner William P. Doyle, who stated, "One of my concerns relates to media reports that a combined east-west fleet of 346 vessels will be reduced to 255 vessels once the proposed Alliance is consummated. I am interested in learning more about the impact this Alliance will have on services provided to consumers, shippers and U.S. terminal operations.’’ Commissioner Doyle added, "Maersk Line, Limited is the largest U.S.-flag carrier in the international fleet. To this end, I do not want the Alliance’s operations to harm or otherwise negatively impact the U.S.-flag international fleet when decisions are made to cascade or otherwise eliminate ships from service."

Commissioner Richard A. Lidinsky, Jr. also stated, "It is clear this Alliance is moving forward as if it has already met regulatory approval despite the lack of any significant filing with regulatory authorities in Europe, China or the U.S. Pushing behind the scenes and placing positive stories with the press is not a substitute for proper consideration of the consequences of this massive carrier alignment."

Commissioner Lidinsky will be attending the annual meeting of the European Maritime Law Organization this week in London where it is anticipated that the proposed P3 Alliance may be a topic of discussion.

Chairman Cordero continued, "Like my fellow Commissioners, I am keeping an open mind about the parameters and impact of this Agreement until it can be fully analyzed. The Commission is responsible for carrying out the congressionally-mandated goals of the Shipping Act, namely, non-discriminatory regulatory processes in harmony with and responsive to international shipping practices. Together with our European and Chinese counterparts, we as regulatory authorities, have responsibilities related not only to our nations, but to the global shipping structure to ensure that this proposed Alliance does not harm others, including consumers, the maritime community, and world trade. Once this agreement is filed, I envision all members of our American maritime industry — shippers, importers, exporters, consumers, ports, unions, intermodal entities — to fully express their views to the Commission in written comments or open hearings as to how this Alliance of foreign flag carriers would affect our waterborne commerce," the Chairman concluded.