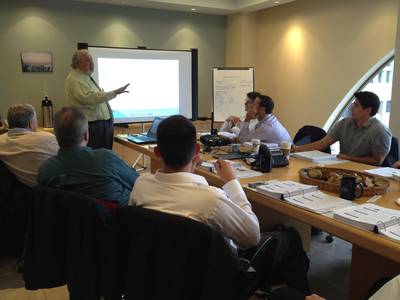 The CPE Certified Port Ececutive Program welcomed ten new graduates at the completion of their program in Vancouver, October 19th 2012.

The new graduates join alumni of over 100 port, transportation and military personnel who have participated in the program since its creation in 2010.

This port management program is a five day course designed to provide participants with a professional education opportunity related to the operations of ports, vessels, marine terminals and the related transportation system. The program gives participants tools and knowledge to make their organization more effective and has drawn the attention of a broad cross section of executives from all over North America.

The Program was delivered by Captain Jeffrey Monroe, CPE, MM, MTM, a licensed master mariner with a Master’s Degree in Transportation Management, who developed the 40 hour Certified Port Executive ProgramTM for MacDonnell and has trained over 300 senior civilian and military personnel throughout Canada including the Canadian National Defense Force Transportation Command.

Company President Ralston MacDonnell congratulated the graduates by saying, “It is our intention to maintain a program that will allow our graduates to have a positive impact on the competitiveness of the port and marine transportation system.”

MacDonnell has trained more than 10,000 port employees throughout North America in maritime and port security, and hosts annual conferences to provide a gathering space and forum for sharing best practices in operations.

Future CPE courses will be held in the following cities;