Singapore-based Emas Offshore announced that CEO and Executive Director Capt. Adarash Kumar has tendered his resignation and his last day of service will be on April 6, 2018. In a stock exchange filing, the operating brand for Ezra Holdings said that Kumar will continue in his duties and responsibilities pending the appointment of a suitable candidate in due course. He was appointed to the Board as Non-Independent, Non-Executive Director on 26 Aug 2014, and re-designated as an Executive Director on 1 May 2015. He was appointed CEO on 25 Sep 2015. Capt.

Triyards Holdings, the offshore marine division of Ezra Holdings, has swung deep into the red following the termination of two shipbuilding contracts worth some $51 million. "The Board of Directors of Triyards Holdings wishes to announce that its wholly owned subsidiary, Saigon Offshore Fabrication and Engineering Limited, has received notices of termination of the two shipbuilding contracts dated 26 June 2015 and the addendum dated 10 May 2017 for the design and construction…

Ezra Holdings Files for Bankruptcy in US

Oilfield services firm Ezra Holdings of Singapore filed for U.S. Chapter 11 bankruptcy at the weekend, blaming a prolonged slump in the energy industry, Reuters reported. Ezra  has been facing hostile actions from creditors at home and abroad as it struggles to recover from a slump in oil prices over the past three years. The company filed voluntary petitions for reorganization under Chapter 11 of the US Bankruptcy Code, according to a stock exchange filing on Sunday. Ezra will…

NYK to Buy Into Emas Chiyoda

Japanese shipper Nippon Yusen Kaisha (NYK) has agreed to invest in EMAS Chiyoda, a subsea services joint venture between oilfield services firm Ezra Holdings Ltd and Chiyoda Corp, Ezra said in a statement late on Friday. Singapore's Ezra, through its EMAS AMC subsidiary, plans to sell a 10 percent stake in the joint venture for $36 million, while engineering company Chiyoda will sell a 15 percent stake. Once the deal is completed, Ezra will hold 40 percent of the joint venture, Chiyoda 35 percent, while NYK will hold 25 percent.

Ezra Swings into Red in Q3

Ezra Holdings saw its net profit for 9M15 grow 50.6 percent to US$51.5 million despite a net loss of US$3 million for the latest quarter, as sluggish oil prices weighed on activities of the oilfield service industry. For the first nine months of its financial year, Ezra posted a net profit of $51.5 million, up 51 percent on the year, though revenue for the period dropped 3 percent to US$391 million, the services provider to the offshore oil and gas sector said in a statement.

Offshore service provider Ezra Holdings has announced that subsea division, EMAS AMC, has won global contracts values at over $115m including options, reports Business Times. These contracts include one for rigid pipe lay for the Aviat field development in the UK North Sea; engineering and offshore support work in West Africa for an oil major which will be undertaken together with Ezra's subsidiary company, EMAS Offshore Limited. Other subsea contract work includes ROV support services and High Voltage Alternate Current (HVAC) pull-ins.

Ezra Holdings Limited, a leading contractor and provider of integrated offshore solutions to the oil and gas industry, today announced that the Group’s Subsea Services division, EMAS AMC, has won multiple new awards from various energy companies valued at over US$70 million. The scope of work includes subsea installation of umbilicals, flowlines and jumpers, as well as provision of services to support rigs. Work has commenced for several projects, with the others slated for offshore execution from Q4 2014 to Q2 2015. 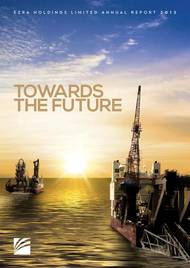 Singapore-based offshore oilfield services firm Ezra Holdings Ltd's quarterly net profit rose 10 percent, with full year revenue rising to a record, powered by a strong performance in its subsea services division. The company said net profit for the fourth quarter ended in August increased to $11 million and full-year revenue rose 18 percent to $1.49 billion. "The group maintains a healthy backlog of approximately $2.4 billion, with most contracts expected to be executed over the next 12 to 18 months," Ezra said in a statement.

Ezra Holdings announces multiple contracts, worth + US$160-million, for its subsea, offshore & energy services divisions. Ezra divisions, EMAS AMC, EMAS Marine and EMAS Energy have been awarded multiple contracts for projects in the North Sea and Asia Pacific. The average tenor for all contracts is approximately 2.6 years including options. EMAS AMC has been awarded several new contracts and options worth up to US$85 million in aggregate for several projects in the North Sea and Asia. This includes a project with an oil major in the Asia Pacific region worth up to US$45-million.

Mr. Lee Kian Soo, Executive Chairman of the Company, steps down to be replaced by Mr. Koh Poh Tiong. Ezra is a leading offshore contractor and provider of integrated offshore solutions in the offshore oil and gas industry. The wide range of services that Ezra offers includes subsea construction and maintenance, drilling support, towing and mooring, pipe and cable operations, high speed cargo and crew transportation. Lee Kian Soo, was founder and Executive Chairman of Ezra Holdings with 20 years at the helm.

AMC Connector AS, a Aker Solutions & Emas Offshore joint venture, has agreed to sell subsea construction & cable-lay vessel 'Lewek Connector'. In October 2010, Aker Solutions announced that it would sell its offshore construction and installation subsidiary Aker Marine Contractors to Ezra Holdings Limited (Ezra), which operates in the offshore construction market under the EMAS AMC brand name. As part of this transaction, Ezra agreed to acquire 50 percent of the shares in Lewek Connector's vessel owning company, AMC Connector AS.

EMAS sees strong start to 2012 with further global contract wins worth US$120 million - 12 January 2012. EMAS, a global offshore contractor and provider of integrated offshore solutions to the oil and gas (O&G) industry and operating brand for Ezra Holdings Limited (Ezra or the Group, 以斯拉控股), today announces two further contract wins worth a total of up to US$120 million for the Group. The offshore support services division, EMAS Marine, has been awarded a new charter by an oil major for a vessel to be deployed in the Asia Pacific region in the 2nd quarter of 2012.