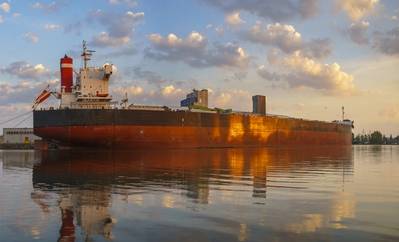 The Baltic Exchange's main sea freight index on Friday marked its best day in over two weeks, led by stronger demand for capesize vessels.
The overall index, which factors in rates for capesize, panamax, supramax and handysize shipping vessels, rose for the fourth straight day and was up 19 points, or 1.72 percent at 1,125 points. The index logged its biggest one-day percentage gain since Jan. 24.
The capesize index gained 128 points, or 7.7 percent, to 1,790 points. With a 22 percent jump, the index saw its best week since the week of Sept. 8.
Average daily earnings for capesizes, which typically transport 150,000-tonne cargoes such as iron ore and coal, rose $928 to $14,136.
"Demand for major bulks into the Far East has continued to drive firmer sentiment and as such rates higher for capesize vessels," said analysts at shipbroker Clarksons Platou Securities.
"After some fresh activity out of South America, capesize rates are closing the week on a stronger note."
The panamax index was down 13 points, or 1.03 percent, at 1,250 points, the lowest since early October.
Average daily earnings for panamaxes, which usually carry coal or grain cargoes of about 60,000 to 70,000 tonnes, fell $104 to $10,030.
Among smaller vessels, the supramax index fell eight points to 825 points, while the handysize index fell three points to 526 points.
Reporting by Vijaykumar Vedala
• Clarksons Platou Securities • Far East • South America