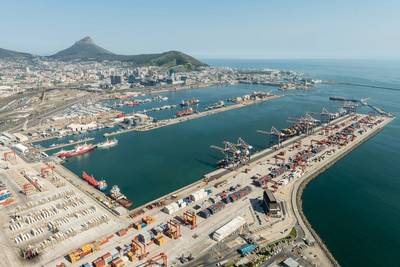 Test results from the individuals suspected to be the first cases of COVID-19 in any South African seaport have all come back negative, Transnet National Ports Authority has confirmed.

Earlier this week two vessels, the general cargo vessel MV Corona and the cruise ship AIDAmira, were held off port limits outside the Port of Cape Town. The cruise liner was later allowed to dock but its roughly 1,700 passengers and crew remained onboard pending test results from one suspected COVID-19 case and seven others who had possible contact with him.

Captain Dennis Mqadi, Executive Manager for Safety Health Environmental & Regulatory Oversight at Transnet National Ports Authority, said, “These precautions and testing were set in motion after a crew member from the MV Corona bulk vessel fell ill with typical COVID-19 symptoms following the vessel’s departure from the port on March 11.”

He added, “Upon further investigation it was confirmed that the ill crew member had flown into Cape Town from Istanbul, Turkey earlier this month with another MV Corona crew member, and that six passengers from the AIDAmira cruise liner had also been on this flight before boarding their vessel in Cape Town. The individuals had to be checked due to their possible contact.”

While only the first crew member was ill, protocols dictated that he and the remaining seven be quarantined onboard their respective vessels.

MV Corona returned to the Port of Cape Town for evacuation on March 16 and was held off port limits. The Maritime Rescue Coordination Centre (MRCC) together with the Port Health unit of the National Department of Health and the Harbour Master of the Port of Cape Town coordinated efforts to evacuate the crew members.

The AIDAmira cruise vessel was permitted to dock on March 16. The six passengers in question were evacuated and taken to the hospital for testing and quarantining by Port Health Officials.

Captain Sabelo Mdlalose, Acting Chief Harbour Master at Transnet National Ports Authority, said, “All parties are relieved that these results have returned negative and that plans can be set in motion for the vessels to continue their journeys.

“This means there have to date been no confirmed cases of COVID-19 in any of our ports but we will remain on high alert after this first scare and will keep working with the Port Health unit of the Department of Health to manage vessels who report potential cases.”

Port Health has now granted clearance for both vessels to continue their journeys from the Port of Cape Town.

It is expected that the AIDAmira passengers will be allowed to disembark in the Port of Cape Town and fly onward to their respective countries.