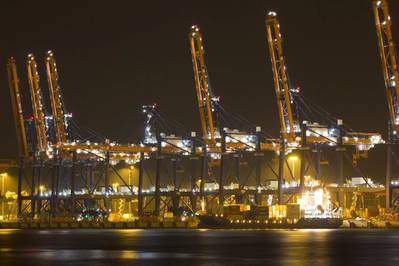 As the average length of the journey increases, partly due to port congestions in China, soaking up capacity and pushing up spot rates, shipowners will likely be enjoying high freight rates until the end of the year.

Iron ore spot freight rates from Western Australia, to Qingdao, China have jumped 163% to USD 21.82 per tonne on 28 September 2021 compared with the same time last year. For a very large ore carrying Capesize ship transporting 200,000 tonnes of iron ore, this represents an increase in freight revenue from USD 1.66 million, one year ago, to USD 4.36 million on 28 September 2021.

Similarly, iron ore spot freight rates from Tubarão in Brazil to Qingdao in China are up 112% compared with 28 September last year and up 174% since the start of this year. Currently at USD 43.2 per tonne, the highest level since December 2009.

Spot freight rates for the Brazil to China iron ore trade, reached an all-time-high at USD 108.75 per tonne in June 2008, during the dry bulk shipping super cycle. 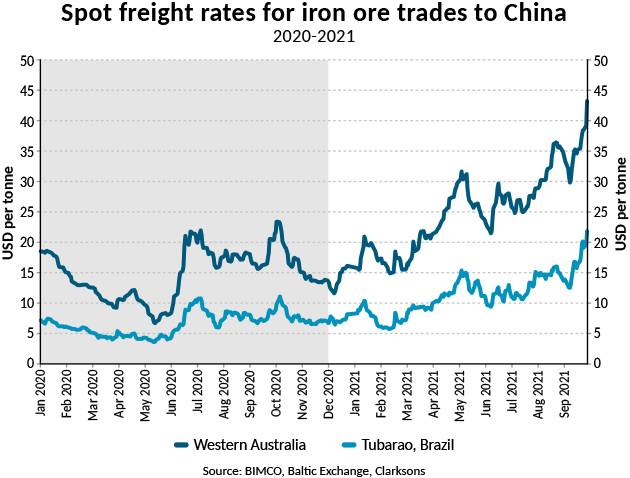 Overall, however, Chinese iron ore imports have fallen so far this year when compared to the highs of 2021, according to the Chinese customs authorities, down by 1.6% after the first eight months of the year when imports stood at 747.4m tonnes. Imports from Australia are down 3.3% at 460.1 m tonnes, while those from Brazil have grown to 147.3 million tonnes, representing a 6.2% increase.

“The increasing number of spot fixtures from the world’s largest iron ore exporters are clearly providing a boost to the dry bulk sector, in particular to the Capesize market, as iron ore exports from Brazil and Australia represent the lion’s share of total Capesize demand,” says Peter Sand, BIMCO’s Chief Shipping Analyst.

”Furthermore, the congestion around China, and longer waiting times, mean that the average duration of the total voyage is increasing, soaking up capacity and adding further upward pressure to freight rates. As we approach what is seasonally the strongest time of year for dry bulk, it looks like owners and operators will continue to enjoy high spot freight rates until at least the end of the year,” Sand says.