BIMCO: No Change in US Imports of Steel Goods From Brazil 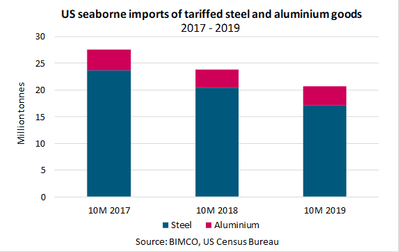 0.0%, no change in US imports of steel goods from Brazil despite quota

Brazil is the largest seaborne exporter of the tariffed steel goods to the USA, twice as large as South Korea, in second place.

In May 2018, after facing tariffs for almost two months, Brazil was excluded from the 25% tariffs on steel goods in exchange for accepting a quota, set at around 4.2 million tonnes. While the available data still shows Brazil is below this limit, it is understood that they agreed to limit their exports each quarter to no more than 30% of the annual quota. This limit was exceeded in both Q1 and Q2, with the total quota at risk of being broken in November and December as well. Since then, exports have fallen to below the levels seen in 2017 and 2018, leading to zero increase in accumulated growth rates.

On Monday, President Trump announced that the US would be imposing tariffs on steel and aluminium imports from Brazil and Argentina. But why now? When announcing the tariffs, the President focused on the falling value of the two countries’ currencies, but Brazil and Argentina have also benefited the most from changing trade patterns, eating into the US’ market share of these exports to China.

A quota remains in place for imports of the steel goods from South Korea, with Australia, Canada and Mexico currently the only countries exempted from both the steel and aluminium tariffs without constraint by quotas.

US total imports of tariffed steel and aluminium down

With the steel and aluminium tariffs now having been in place for twenty months for most countries, and tariffs on goods from the EU for eighteen months, US imports of the two goods have fallen.

This latest deterioration in trading relationships is unlikely to be felt directly be the shipping markets, as the volumes are small. However, it once again adds barriers to free trade, which hurt shipping.