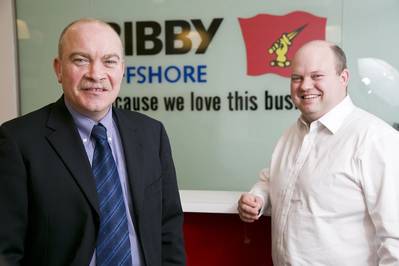 BRIL was established at the end of 2011 to manage the increased market demand for ROV services and has since expanded from support of the company’s own vessels and diver-less intervention services to external clients. The past 12 months has seen staff numbers rise considerably, with the addition of 20 onshore personnel and the offshore workforce trebling to more than 100.

Mr. Howe’s position has been created due to the division’s recent successes and subsequent expansion. Already this year, BRIL has enhanced its fleet by chartering the multi-purpose offshore vessel the Toisa Warrior - the company’s first long term charter and has secured a contract with Centrica worth a potential £40million, the company said.

In his new role, Mr. Howe will be the direct liaison between the contract steering committee and the BRIL project management team for the Centrica contract. He will oversee the execution of projects, managing service delivery quality, operational health and safety and operations personnel development - including training and mentoring. David will ensure services are delivered in line with BRIL and Bibby Offshore’s core values as well as providing technical and operational input to tenders.

David brings 25 years of experience in the oil and gas industry to BRIL. He joins the company from Technip Offshore Wind, where he held position of senior projects manager, responsible for tendering and subsequent delivery of Offshore Windfarm Projects. Prior to this, he was employed by Subsea 7 and legacy companies Halliburton Subsea, Rockwater and Subsea Offshore working on IRM and Construction projects across the UKCS, Norway, Far East, West Africa and GOM.

Mr. Longstaff’s role of survey manager is also a new position which has been created to augment BRIL’s inspection and ROV capability and provide clients with all key services required in the construction and IRM markets for both diving operations and remote intervention activities for all capacity of ROV vessels. Robin brings 15 years of construction and oil and gas experience to the role from companies including Subsea7, Halliburton and UTEC Survey Constructions Services. At BRIL he will be responsible for all of BRIL’s survey operations and personnel across the globe.

BRIL and Bibby Offshore, part of Bibby Line Group, has grown from 10 employees in 2003 to now employing 1,300 people onshore and offshore worldwide, with offices in Aberdeen, Liverpool, Singapore and Trinidad. The company has an international fleet of six subsea support vessels including the most modern fleet of DSVs in the North Sea.