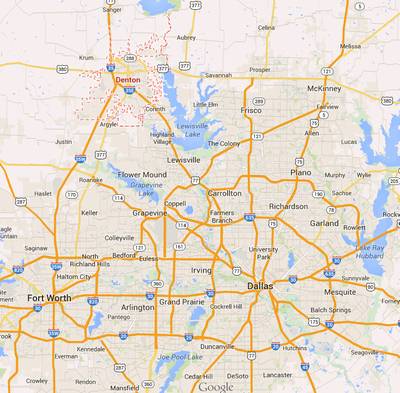 Fracking has been banned by voters in Denton, TX, a suburb of Dallas. This is significant as fracking was pioneered nearby. (Source: Google Maps)

The first ban on new hydraulic fracturing in Texas went into effect  in the city of Denton, a month after voters deemed the oil and gas extraction method behind the U.S. energy boom a community nuisance.

The Texas Oil & Gas Association, an industry group, and the Texas General Land Office filed a lawsuit shortly after voters in the city of 123,000 approved the ban on Nov. 4. The lawsuit aims to allow the technique known as fracking, widely used in the top crude and natural gas producing state in the country.

"Whatever happens next will take place in a courtroom," said Ed Ireland, executive director of the Barnett Shale Energy Education Council, a group aligned with producers.

Fracking was pioneered in the Barnett and Exxon Mobil's XTO unit has been a significant operator here. Fracking mixes pressurized water, sand and chemicals to release hydrocarbons from rock.

Residents in Fort Worth, Denton and other cities above the Barnett, have been at odds with operators, who say the method is safe. Residents and environmental groups says it is noisy, pollutes underground aquifers and is responsible for a series of recent earthquakes to hit the area.

The measure in Denton, with about 270 wells, won more than 58 percent of the 25,376 ballots cast, official results showed. Elsewhere, fracking bans met with mixed results in November elections.

Voters in three Ohio cities rejected proposed bans while one ban was approved. Proposed bans failed in one California county but passed in two others. Bans approved by voters in some Colorado cities have produced lawsuits.

Cathy McMullen, leader of an anti-fracking group that pressed for a vote in Denton, said in a statement: "We're glad our city is listening. We wish we could say the same about our state."

After the election, David Porter, senior member of the energy regulatory Texas Railroad Commission, said he is confident that "reason and science will triumph" and the ban will be overturned. (Editing by Jon Herskovitz and Alan Crosby)