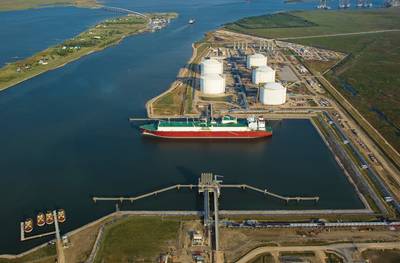 The U.S. Department of Energy announced that it has signed an order authorizing Golden Pass Products LLC to export domestically produced liquefied natural gas (LNG) to countries that do not have a free trade agreement (FTA) with the United States. Golden Pass is authorized to export LNG up to the equivalent of 2.21 billion cubic feet per day (Bcf/d) of natural gas to any non-FTA country not prohibited by U.S. law or policy from the Golden Pass Terminal near Sabine Pass, in Jefferson County, Texas.

With the dramatic increase in domestic natural gas production, the U.S. is transitioning to become a net exporter of natural gas. The Department of Energy has authorized a total of 19.2 Bcf/d of natural gas exports to non-FTA countries from planned facilities in Texas, Louisiana, Florida, Georgia and Maryland. These projects, if built, would position the U.S. to be the dominant LNG exporter in the world.
U.S. Secretary of Energy Rick Perry stated, “This announcement is another example of President Trump’s leadership in making the United States an energy dominant force. This is not only good for our economy and American jobs but also assists other countries with their energy security.”
Golden Pass estimates the construction of its facility will provide 45,000 direct and indirect jobs over five years, and the project will provide 3,800 direct and indirect permanent jobs over the next 25 years of operational activity. Golden Pass also estimates the cumulative impact of construction and 25 years of operation will provide up to $2.4 billion in federal tax revenues and $1.2 billion in state tax revenues.
Increased natural gas production in the U.S. is helping to improve our energy security while stimulating economic development and job creation around the country. This increase in domestic natural gas production is expected to continue, with the U.S. Energy Information Administration’s Short Term Energy Outlook projecting an average dry natural gas production rate of 73.1 Bcf/d in 2017, the second highest on record.
Federal law generally requires approval of natural gas exports to countries that have an FTA with the U.S. For countries that do not have an FTA with the U.S., the Natural Gas Act directs the Energy Department to grant export authorizations unless the Department finds that the proposed exports “will not be consistent with the public interest.”
The Energy Department conducted an extensive review of the Golden Pass application. Among other factors, the Department considered the economic, energy security, and environmental impacts, including macroeconomic studies that showed positive benefits to the U.S. economy in scenarios with LNG exports up to 28 Bcf/d. The Department determined that exports from Golden Pass, jointly owned by Qatar Petroleum (70 percent) and ExxonMobil (30 percent), for a period of 20 years, was not inconsistent with the public interest.
• liquefied natural gas • Louisiana • Maryland