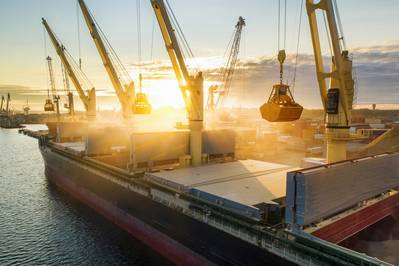 More than 100 cargo ships were kept from loading agricultural goods in Argentina on Monday, as a wage strike by grains inspectors and oilseed workers stretched into its second week, paralyzing exports from one of the world's breadbaskets.

Argentina is the No. 1 international exporter of soymeal livestock feed used to fatten hogs and poultry from Europe to Southeast Asia. Contract talks between workers and export companies have broken down over compensation packages, with both sides accusing the other of intransigence.

"The strike continues without any expectation that negotiations will restart over the short term. We have more than 100 vessels waiting to be loaded," Gustavo Idigoras, head of Argentina's CIARA-CEC export companies chamber, told Reuters.

The strike was started on Dec. 9 by the Argentine oilseed workers federation, the Urgara union representing portside grains inspectors and the SOEA soy crushers union, based in the northern part of Argentina's main grains hub of Rosario, which ships about 80% of Argentina's farm exports.

With soymeal and soyoil factories idled by the strike, no trucks hauling soybeans entered Rosario terminals on Monday versus 1,088 cargos unloaded on Dec. 21, 2019, according to Rosario Grains Exchange data. Nor were there any soy trucks unloaded at Rosario last week.

"There is high participation in the strike by our members and every time that the companies make a statement it generates more anger and much more support from the people," said Urgara spokesman Juan Carlos Peralta.

Urgara negotiates with the Private Commercial Ports Chamber, or CPPC, while the federation and SOEA negotiate with CIARA. Peralta said Urgara had struck individual deals with some export companies but that stark differences remained in negotiating positions and that a comprehensive deal was far off.

SOEA issued a strongly worded statement on Monday afternoon saying its members voted to extend the strike for at least 24 hours.

"The employers refuse to dialogue while they insist on mistreating and defaming workers," the statement said.

Farmers have been hanging on to all the stocks they can this year, waiting for further weakness expected in the peso before selling. The currency has weakened 27.9% this year to 83.15 per U.S. dollar.

"This year, exports of corn, wheat and soy-based products are projected at $21.43 billion. That would represent a fall of $1.32 billion compared with 2019," said a report released on Friday by the Rosario exchange.