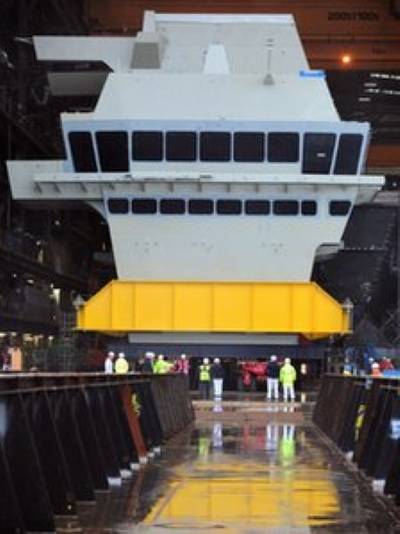 The BAE Systems built Forward Island for 'HMS Queen Elizabeth' to transit by barge for mounting in Rosyth shipyard.

The iconic Forward Island, known as Upper Block 07, is the hub of the ship as it contains the main bridge and approximately 100 vital mission systems compartments.

Weighing 680 tonnes, this is the first block to depart with her final paint colours applied, all windows fitted and consoles installed, along with 43km of cables and 3,101 pipes. It also proudly displays the HMS Queen Elizabeth crest.

The Forward Island recently passed a Ministry of Defence audit on all compartments and a full BAE Systems care and protection inspection to ensure the block is weather proof and able to undertake the sea journey. A 78 tonne lifting frame has also been attached to allow the Goliath Crane in Rosyth to lift it onto HMS Queen Elizabeth in March.

Once the Long Range Radar has been installed on top of the Forward Island, the ship will stand at 56 metres, which is taller than the Niagara Falls.  The aircraft carriers HMS Queen Elizabeth and HMS Prince of Wales are being delivered by the Aircraft Carrier Alliance, a unique partnering relationship between BAE Systems, Thales UK, Babcock and the UK Ministry of Defence.

The ship’s main bridge has floor-to-ceiling windows, which are up to two metres tall to ensure a level of visibility far beyond previous aircraft carriers. HMS Queen Elizabeth is the first aircraft carrier to use an innovative design of two islands. The second ‘Aft Island’ operates as an airport control tower to co-ordinate aircraft movements, but both islands are designed with the ability to incorporate the other’s role in an emergency, thus increasing the survivability of the ship.

The 65,000 tonne Queen Elizabeth Class aircraft carriers will be the centre piece of the UK’s military capability. They will be based in Portsmouth where significant investment is already underway to prepare for their arrival.