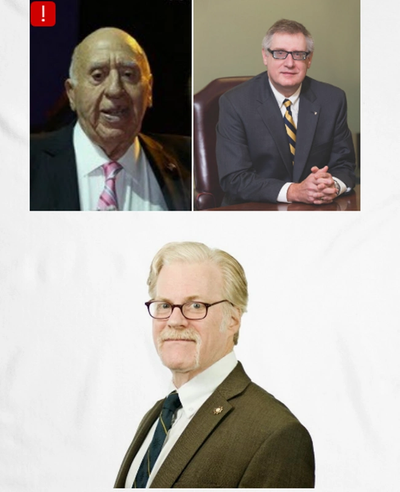 The United Seamen's Service (USS) 2016 Admiral of the Ocean Sea Awards (AOTOS) will be presented to Arthur E. Imperatore, Founder and President of New York Waterways; Donald Marcus, President of the International Organization of Masters, Mates & Pilots; and Christopher Wiernicki, Chairman and CEO of American Bureau of Shipping. The maritime industry's most prestigious awards will be presented at the 47th annual gala industry dinner and dance at the Sheraton New York Times Square Hotel, New York City, on October 28, 2016. Recognition will also be given to American seafarers for specific acts of bravery and heroism while at sea.

General Kenneth Wykle, USA (Ret.), Chairman of the USS AOTOS Committee, said: "We are honoring an eclectic group of men who have made different contributions to the maritime industry. Mr. Imperatore's cargo is people operating 48 ferries around New York Harbor; Don Marcus is both an esteemed labor leader and an attorney; and Chris Wiernicki, internationally recognized in the field of naval architecture." He added: "Our industry is fortunate to have such a wonderful cross-section of good people deserving of such an honor."

Mr. Imperatore developed a safe, reliable, environmentally sound commuter ferry, which has transported more than 200 million people since 1986.  This ferry system also has served several times as a critical rescue and evacuation system. NY Waterway is the largest private ferry operator in the United States. Now 93, Mr. Imperatore and his brothers founded the A-P-A Transport Corporation and built it into the most successful short-haul trucking concern in the nation. The Imperatores instituted innovative transportation systems and developed detailed productivity and efficiency systems,

Mr. Imperatore has drawn from his personal, hands-on commitment to excellence and more than 60 years of transportation industry experience to pioneer a Ferry/Bus system which today is an international model for effective, coordinated mass transportation systems. Navigating the waters of the Hudson and East Rivers, Mr. Imperatore's commuter operation has built upon the Metropolitan Area's greatest natural asset, its waterways.  His industriousness in harnessing the vast potential of New York's waters has sparked renewed an intense interest in ferry service and investment.  At NY Waterway's Port Imperial terminal in Weehawken, NJ, Mr. Imperatore is developing a thriving residential and commercial community, which stands out as the crowning jewel of a revitalized northern New Jersey waterfront.

Donald Marcus was elected as President of Masters, Mates, & Pilots (MM&P), the marine affiliate of the International Longshoremen's Association (ILA), AFL-CIO, in January 2013 and was Secretary-Treasurer of the union from 2010 to 2012.Previously, he served three terms as the union's Vice President for Pacific Posts. After graduating from the U.S. Merchant Marine Academy, Kings Point in 1979 he sailed in all licensed Deck Officer capacities - from Third Mate to Master-- aboard U.S. flag ships in international trade.  His last shipboard assignment was as Master of the MV Sea Land Pacer.  Mr. Marcus is also a graduate of the University of California, Hastings College of the Law and has been admitted to the California Bar Association.  He has been a union member throughout his working life.

He also serves as President of the Maritime Labor Alliance, a six-union partnership that includes MM&P, the ILA, the International Longshore and Warehouse Union (ILWU), the Inland Boatmen's Union (IBU), the Marine Engineers' Beneficial Association (MEBA) and the American Radio Association (ARA). MM&P represents licensed deck officers on U.S.-flag commercial vessels sailing offshore, on the inland waterways and on civilian-crewed ships in the government fleet; mariners who work on tug, ferry and harbor tour vessels; licensed and unlicensed mariners who work on dredges; state pilots; marine engineers; and maritime industry shore side clerical and service workers.

Mr. Wiernicki began his long-standing career with ABS in 1993, working as ABS Americas Vice President of Engineering. Since then, he has occupied various leadership positions including serving as ABS's President and Chief Operating Officer for four years prior to his appointment to chairman in April 2011. Before joining ABS, he was appointed as President and Chief Executive of Designers and Planners, Inc., one of the leading naval architecture firms in the United States.

Mr. Wiernicki holds a Bachelor of Science in Civil Engineering from Vanderbilt, a Master of Science in Structural Engineering from George Washington University, where he was later elected to the George Washington University Engineering Hall of Fame, and a Master of Science in Ocean Engineering from Massachusetts Institute of Technology (MIT). He is also a graduate of Harvard Business School's Advanced Management Program. He received an honorary Doctor of Science degree from Maine Maritime Academy and SUNY Maritime College. Today, Mr. Wiernicki remains internationally recognized for his contributions to the field of naval architecture. Under his leadership, ABS continues to grow its international presence as well as expand the company's reach with technology and innovation.

Proceeds from the AOTOS event benefit USS community services abroad for the U.S. merchant marine, seafarers of all nations, and U.S. government and military overseas. The recipients will share the evening with a group of American seafarers who will be honored for acts of bravery at sea.  USS continues to provide community services for the U.S. Merchant Marine, the American Armed Forces, and seafarers of the world.  USS, a non-profit agency established in 1942, operates centers in six foreign ports in Europe, Asia, and Africa and in the Indian Ocean, and also provides seagoing libraries to American vessels through its affiliate, the American Merchant Marine Library Association.

USS continues to provide community services for the U.S. Merchant Marine, the American Armed Forces, and seafarers of the world.  USS, a non-profit agency established in 1942, operates centers in six foreign ports in Europe, Asia, and Africa and in the Indian Ocean, and also provides seagoing libraries to American vessels through its affiliate, the American Merchant Marine Library Association.