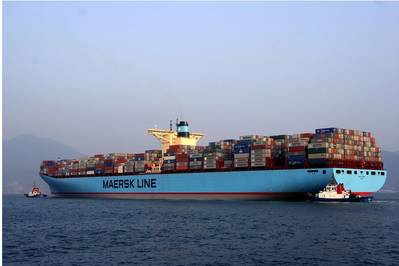 World No.1 container liner Maersk, Swiss peer MSC and 13 other shipping firms are set to escape possible penalties as EU antitrust regulators plan to accept their offer to end a five-year probe, three people familiar with the matter said on Tuesday.
The European Commission is likely to announce its decision next month, which means no fine or finding of wrongdoing against the companies, the sources said. Commission spokesman Ricardo Cardoso declined to comment.
The case, which focuses on the way the companies announce price increases, could have repercussions for other sectors such as supermarkets and chemical firms, which use similar methods and are keen to stave off any suspicion of collusive behaviour.
The container shipping industry, which ships largely consumer goods ranging from iPhones to designer dresses, is suffering its worst ever downturn, forcing liners to cut costs and try to build scale due to a weak global economy and overcapacity.
While the prospect of no fines will be welcome, greater price transparency is likely to give companies a better idea of their rivals' strategies and also place limits on what types of actions they can take.
The other 13 firms are No. 3 player CMA CGM, Germany's Hapag Lloyd and Hamburg Sud, Taiwan's Evergreen Marine, China Ocean Shipping (Group) Company (COSCO), China Shipping, OOCL (Orient Overseas Container Line), South Korean firms Hanjin and Hyundai Merchant Marine , Japan's Mitsui OSK Lines (MOL) and Nippon Yusen Kaisha, United Arab Shipping Company (UASC) and Israeli company Zim.
COSCO and China Shipping merged in February to become China COSCO Shipping.
Maersk and UASC declined to comment. Zim had no immediate comment while CMA CGM and Evergreen did not immediately respond to a request for comment. China COSCO Shipping was not available to comment outside office hours.
The companies in February offered to publish binding actual rates 31 days before they go into effect, with the figures acting as a price cap. The Commission subsequently sought feedback from clients and rivals about the proposal.
The pledge would be valid for three years. The case started with dawn raids in May 2011, triggering an investigation in November 2013. Regulators said the liners may have been illegally orchestrating price hikes since 2009 via public announcements of rate increase plans on their websites and in the specialised trade press.