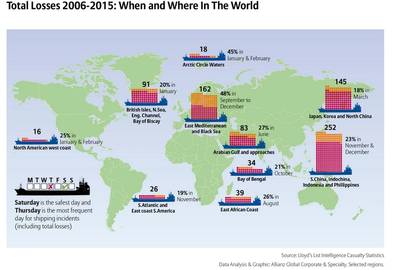 The shipping industry saw its safest year in a decade in 2015, according to a new report from Allianz Global Corporate & Specialty (AGCS), though 85 total losses reported worldwide last year, down from 88 in 2014 and well below the 10-year average of 123.

Although the number of losses remained stable year-on-year, declining by just 3% compared with the previous year (88), 2015 was the safest year in shipping for a decade. Losses have declined by 45% since 2006, driven by an increasingly robust safety environment and self-regulation. However, disparities by region and vessel-type remain.
More than a quarter of all losses occurred in the South China, Indochina, Indonesia and Philippines region (22 ships). Losses increased year-on-year, unlike other major regions.
Cargo and fishing vessels accounted for over 60% of ships lost globally, with cargo losses up for the first time in three years. The most common cause of total losses is foundering (sinking), accounting for almost 75% of losses, up 25%, and often driven by bad weather.
There were 2,687 reported shipping incidents (casualties including total losses) globally during 2015, down 4%. Activity is spread across all days of the week, although Thursday sees the most incidents and Saturday the fewest.
The East Mediterranean and Black Sea (484) remains the top incident hotspot. Three vessels share the accolade of being the most incident-prone - a ro-ro in the Great Lakes region, a hydrofoil in the East Mediterranean & Black Sea and a ferry in the British Isles – with 19 incidents over the past decade.
• Allianz • Black Sea • British Isles