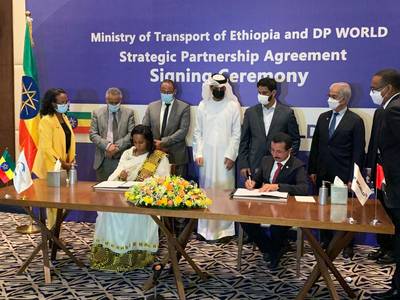 Dubai's DP World said on Thursday it had signed a preliminary agreement with Ethiopia's transport ministry to co-develop logistics infrastructure in the East African state along a trade corridor connected to Somali semi-autonomous region Somaliland.

DP World and its partners anticipate investing up to $1 billion over the next ten years building warehouses, silos and dry ports, the state-owned company said in a statement.

Further details of the joint venture, or how the projects would be funded were not disclosed

DP World, best known for operating ports around the world, is developing and expanding Somaliland's Berbera port, which it hopes will be a major gateway for trade for landlocked Ethiopia.

"We strongly believe that developing the Berbera corridor into one of the major trade and logistics corridors will unlock huge economic benefits for Ethiopia, and support its ambitious development plans," Chairman Sultan Ahmed bin Sulayem said.