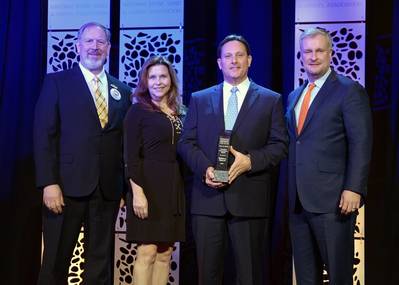 “I understand what it means to be on this list,” Wetta says. “This is the only job and only industry I’ve worked at. I’ve been doing this almost 40 years.” Wetta had the honor of presenting the Barry K. Wendt Commitment award to Tony Basolo with Dolese Bros. in 2012.  Furthermore, he works with or knows ten previous recipients.

Wetta serves on the Executive and Membership Board for National Sand, Stone & Gravel Association (NSSGA) Manufacturers and Services Division. His memberships include the American Society of Mechanical Engineers, National Society of Professional Engineers, Louisiana Engineering Society, Society of Automotive Engineers and Western Dredging Association (WEDA).  Wetta is also actively involved in many civic and charitable organizations including the Bayou Steel/Evonik Reserve Community Advisory Panel (BE CAP).

During his acceptance speech, Bill stated, “I never had the opportunity to meet Barry, but I had the honor of presenting this award to Tony Basolo in 2012 and had researched Barry’s impact on this industry and everyone around him. I would like to thank my family, my DSC friends and coworkers, NSSGA and the aggregates industry as a whole, for encouraging and accepting me and for providing all the opportunities I have received.”

Bob Wetta, President and CEO of DSC Dredge and brother of Bill Wetta, said, “DSC’s founder and our father, Tommy, would be so proud to see Bill receive this prestigious award.  I know firsthand the high level of commitment to our company and the industry that Bill has dedicated himself to with all his energy and heart.  I am proud to be on his team, both professionally and personally.  Great job Bill, congratulations.  On behalf of your fellow DSC team, we are as thrilled as you are humbled.”