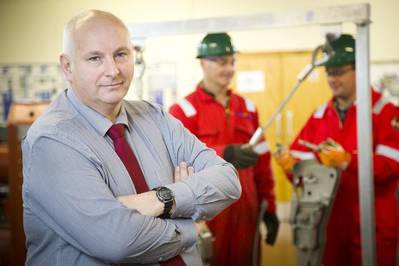 Survival Craft Inspectorate (SCI), a global provider of emergency marine systems and support services, said it has made a key appointment as it targets further growth in 2014. David Weston has been appointed training and competence operations manager at the business, which recently opened its 12th office in Rotterdam.

As well as his company-wide auditing role, David – who served in the RAF for 22 years – heads up the new Survival Craft Inspectorate Training Academy in Stonehaven.

David served as a sergeant with the RAF, where he worked on aircraft systems, missile systems and communications, before becoming involved in the apprenticeship program as an assessor and internal verifier.

Prior to joining Survival Craft Inspectorate, he has worked as an instructor at Burnley College, was responsible for training and competency at Centrica Energy East Irish Sea where he also carried out audits on suppliers and was an approval auditor (competency management systems) for OPITO.

Launched in the summer of 2013 following a £500,000 investment, the SCI Marine Training Academy in Stonehaven is expected to annually host around 5,000 students seeking to enhance their skills across a diverse range of marine and safety related disciplines.

Academy courses include fast rescue craft coxswain, daughter craft coxswain, twin fall lifeboat coxswain and technical training aligned with SCI products. A davit has been installed on the quayside for practical training sessions. The site, formerly the Maritime Rescue Institute (MRI) operation, includes a main building, offices, classrooms and workshop on the harbor front, and an additional building which will be used as a training room.

Earlier this year, SCI launched a new division to supply, install and maintain emergency liferafts for the commercial cruise shipping and energy markets.

A new office in Rotterdam, which opened in November 2013, was the company’s 12th worldwide. Its headquarters and manufacturing base is at Findon, just outside Aberdeen. As well as the Stonehaven operation, the company has offices in Great Yarmouth, Florida and Houston in the United States, Canada, Norway, Singapore, Malaysia, Qatar, and Western Australia.

Survival Craft Inspectorate is an expert in the manufacture, inspection, testing and servicing of lifeboats, fast rescue craft, release mechanisms, winches and davits to international standards for the global merchant shipping, cruise and oil and gas sectors.

Its acquisition of the RocLoc trade and assets, from Canada-based Mad Rock Marine Solutions Inc, gave the company enhanced access to the cruise ship safety market. The patent-protected RocLoc hook system, combined with the Safelaunch system, strengthens the company’s place in the market ahead of new safety regulations coming into force in 2014.

The company, which earned a Queen’s Award for Enterprise, has 170 staff.