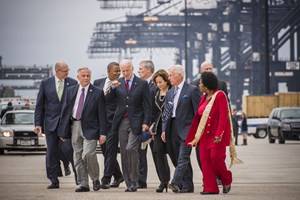 Vice President Joe Biden visited the Port of Houston Authority's Bayport Container Terminal Monday to highlight the importance of ports and the Panama Canal expansion. His next stop is Panama, where he will tour the expansion project, set for completion in 2015.

Biden focused on investments in the Port of Houston that have triggered a 48% increase in exports. He also acknowledged the port is responsible for almost $500 billion of economic activity annually, which contributes more than two million jobs around the country.

"Infrastructure matters and ports matter the most," Biden said. "Investing in infrastructure is how you create jobs, and that's the secret of the journey of America."

Forecasts indicate that by 2035, the number of containerized exports from Houston to Asia via the Panama Canal will increase more than five times what is exported through the port today.

Biden was joined by Secretary of Transportation Anthony Foxx and a delegation of elected officials from across the nation. The Vice President also highlighted the $10 million TIGER Grant recently awarded to the Port Authority for expanding the wharf at the Bayport Container Terminal.

During his visit, Biden consulted with the Port Commission Chairman Janiece Longoria and other local and federal leaders, including Congressional members Gene Green, Sheila Jackson Lee and Al Green, regarding their vision for the region for job creation, economic growth and infrastructure development.