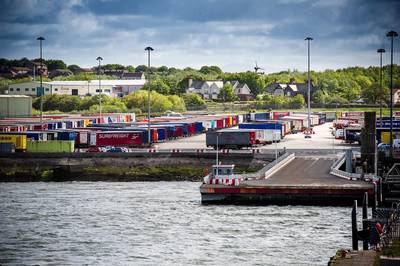 A new link-span bridge at the Port of Heysham is set to increase throughput at the Lancashire port by allowing it to accommodate larger RoRo vessels operating on the Irish Sea.
The £10 million investment by owners Peel Ports will create a fourth berth for freight and passenger traffic and help operators to respond more effectively to growing demand. The funding will also see a new pontoon built to support offshore crew transfer vessels, a new port entrance created and various improvements to the port IT and terminal operating systems.
Work will begin in November and is expected to be completed by October 2017.
A new link road connecting the port and the M6, bypassing congestion in Lancaster, is set to open on October 31. Heysham is also the closest port for several major offshore infrastructure projects including the proposed National Grid connection of Moorside nuclear power station in Cumbria and the Dong Energy Walney Extension wind farm.
The Port of Heysham is one of seven statutory harbor authorities owned and operated by Peel Ports, with deep water harbouring able to accommodate some of the world’s biggest RoRo vessels and numerous daily sailings from providers such as Seatruck, Stena Line and the Isle of Man Steam Packet.
Port Director, David Huck, said, “This is a transformational time for Heysham port. We’ve already been working with local partners to maximize the benefits of the Bay Gateway link road project to the community. Now our major investment to increase capacity and flexibility will further strengthen the port’s role as a logistics hub for the region, particularly for services to Ireland and the Isle of Man. We’ve also built in an element of future-proofing, giving us the ability to accommodate projected volumes for many years to come.”
The port has 1,000 meters of berthing space and 120,000 square meters of multi-user warehousing. In 2015 around 325,000 units of cargo were transported through the port, a large proportion of which were cars, with Heysham being a key location for vehicle imports and exports. It employs around 80 staff and has its eyes firmly set on further growth and investments in people, processes and technology.
Alistair Eagles, CEO of Seatruck, said, “We’re experiencing a period of unprecedented growth, more than three times the market rate. We recently added a larger vessel on the Dublin-Heysham service to help keep up with demand and a fourth vessel to one of our complementary services running between Dublin and Liverpool.”
“2016 will continue to be a pivotal year with the new link road, this new link-span and the potential for connections with the Liverpool2 container terminal and new regional distribution centers,” Eagles said. “These developments will support our ambitious targets and allow us to provide more frequent and larger services, especially given the interest in our unaccompanied cargo model.”
Road connectivity at the port is soon to be helped by the opening of the Bay Gateway link offering a direct connection to the M6. There is also a branch rail line from the port connected to the North West coastal line.
The new road will allow hauliers to commit to more deliveries on a daily basis as the average journey time is set to be reduced by 30 minutes. According to some studies the economic growth forecast could potentially support 250 new jobs in port-related activity and hundreds more in haulage, logistics and distribution. It is estimated that for £1 invested, the link road will earn £4.40 for the local economy.
Heysham is also expected to benefit from the opening of the Liverpool2 deep-water container terminal, developed and operated by Peel Ports, which will create a new ocean gateway for international cargo. The £400 million investment is transforming what is already the U.K.’s biggest transatlantic container port, allowing it to double capacity and accommodate the latest generation of so-called mega-ships. Already in 2016, the company has attracted a number of new or expanded shipping services, including the return of the world’s biggest shipping line, Maersk, to Liverpool after a 10-year absence.
• National Grid • operating systems • Seatruck