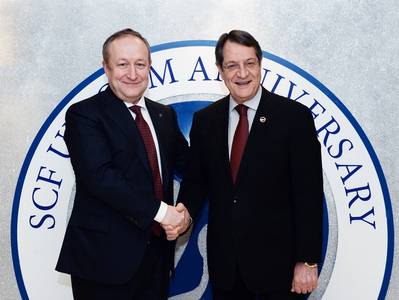 Unicom was established in 1991, in Cyprus, to allow global charterers to transport their freight with the help of Sovcomflot Group’s fleet. Over the years, Unicom has become one of the most recognisable brands within Sovcomflot Group, Russia’s largest shipping company. Nowadays, Unicom is a true leader in global ship management, with an experienced international team that is a fusion of unique British, Russian and Cypriot maritime cultures, providing strong in-house expertise, reflected in Unciom’s motto: ‘Experienced in all Oceans’. As a result, the quality of Unicom’s services has an excellent reputation with charterers.

The anniversary ceremony was attended by honorary guest President Nicos Anastasiadis, President of the Republic of Cyprus. Participants also included: Viktor Olerskiy, Deputy Minister of Transport of the Russian Federation and the Head of the Federal Agency for Marine and Transport; Marios Demedtriades, Minister of Transport, Communication and Works of the Republic of Cyprus; Sergey Frank, President and CEO of Sovcomflot, Nicholas Fairfax, Chairman of SCF Management Services Dubai and a member of Britain’s House of Lords, and a company veteran Vadim Kornilov, President of Sovcomflot Group in 1990-1999.

Currently Unicom is responsible for the technical management of 77 vessels within SCF Group and 19 vessels owned by other companies. The technical specifications of many of the vessels under Unicom’s management make them unique.

At the event, a large group of Unicom’s employees and veterans were presented with corporate awards. The highest corporate honor, a Sovcomflot Medal, was awarded to Alexander Komyshev, Unicom’s HSSE Manager, for his dedicated work, commitment, and contribution to the development of SCF Group. The Komyshev family serves as a symbol of lifelong commitment common within SCF Group’s team: his youngest son Alexander Jr. is also employed by Unicom as Fleet Operator, while the elder son, Andrey, is the Master of LNG carrier SCF Melampus.

“Today, it is difficult to imagine successful operation of the Sovcomflot Group fleet without the skilled technical management provided by Unicom. A quarter of a century ago, a unique maritime culture was forged, encompassing the best of Russian and international experience in fleet management. Competent organisation and high degrees of professionalism have enabled Unicom to successfully master the technologies to transport hydrocarbons by sea, including LNG transportation, shuttle tanker operations in the Arctic, and offshore platform supply services. In celebrating the company’s anniversary, we pay tribute to the veterans who were there from the inception of the company and have passed their invaluable experience to the current generation”, SCF Group’s President and CEO Sergey Frank emphasised in his speech.

“Since its establishment 25 years ago, Unicom has grown into a worldwide-acknowledged company providing a full range of ship management services. I would like also to express my government’s appreciation and thanks for the trust you place on Cyprus and your contribution to the growth and development of Cyprus’ shipping industry. Our country is considered to be one of the largest third-party ship management centres globally, and this is largely due to the contribution of companies like Unicom”, the President of Cyprus Nicos Anastasiades said.

“Whilst we are proud to look back at Unicom’s past achievements, this anniversary is a good opportunity to look into the future and the opportunities that lie ahead. Our primary objective is to continue to enhance the range and quality of services we provide to our clients, while continuing to adopt the latest maritime transportation technologies that are focused, amongst other things, on improving maritime safety and environmental protection”, said Managing Director of SCF Unicom Sergey Popravko.