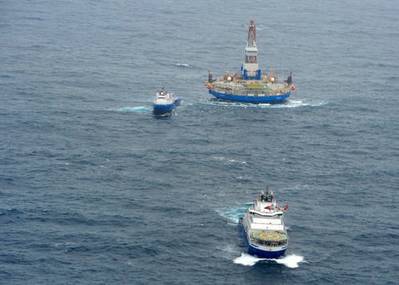 The US Coast Guard cutter Alex Haley was sent to assist, establishing a tandem tow of both Aivig and Kulluk, which effectively prevented their drift towards shoal water, then, due to the severe weather the tow-line parted and became entangled in one of the cutter's propellors. The USCG recalled the vessel to base.

Meanwhile the Royal Dutch Shell despatched tugboat, Guardsman arrived at the scene, taking the rig in tow until its towline also parted. Unfortunately, it proved impossible to evacuate the crew of the drifting rig as the 50 mph wind and 20 ft seas were causing it to pitch and roll to such a degree that hoising personnel was too dangerous.

In due course, a Coast Guard helicopter delivered engine spare parts to the crew of the support vessel, Aivig, who repaired and restarted the engine, so that it became possible once more to resume towage of the rig.

“The multiple towline failures only highlight the extremely challenging situation created by the winds, seas, and sheer bulk of the Kulluk. I applaud the efforts of all the vessels on scene and their courage in the face of almost impossible odds,” said Rear Adm. Thomas Ostebo, commander 17th District in Juneau, Alaska.

The Coast Guard, Royal Dutch Shell, State, federal, and local officials in Kodiak have set up a unified command to be prepared in case any of the vessels run aground and potentially release any fuel. This unified command stated that it is closely monitoring the overall rescue operation and is prepared for any eventuality.