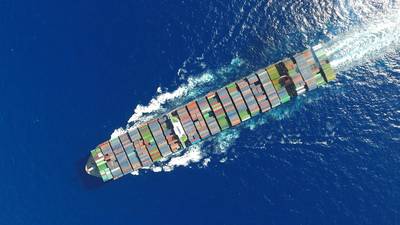 The year 2021 has started in much the same way as 2020 ended for U.S. container imports; import volumes are still surging. As per usual seasonality, volumes came down a little in January and February, though this year the drop wasn’t as steep as usual, says shipping organization BIMCO. Imports by the two San Pedro Bay ports in California rose 27.8% in the first two months of the year compared to the same period in 2020. Although last year’s comparison is low due to the COVID-19 impact, volumes are up by 13.1% compared with the start of 2019, having reached 1.6 million TEU.

Looking at the entire U.S. West Coast, loaded imports are up by 25.3% (and by 9.6% from 2019) and exceeding 2 million TEU in January and February for the first time in history.

Despite strong volumes, there are also signs of slowing. While the 986,555 TEU laden containers imported in February represent an impressive level, it is the first time that monthly imports have been below 1 million TEU since July 2020. Imports in February 2021 are however still the highest ever recorded in the month of February by the U.S. West Coast. When considering total throughput, which includes both imports and exports in the U.S. West Coast ports 2021 has started up 12.6% from 2020, with the total number of TEUs handled reaching 2.7 million.

“Although spot freight rates have eased in recent weeks from record highs, high freight rates will not disappear any time soon. This is due to the continued strength of U.S. imports in combination with disruption from the transpacific trade that has affected the rest of the container shipping market. With carriers successfully closing long term contracts at today’s very profitable levels, their bottom line is set for another successful year in 2021,” says Peter Sand, BIMCO’s Chief Shipping Analyst. 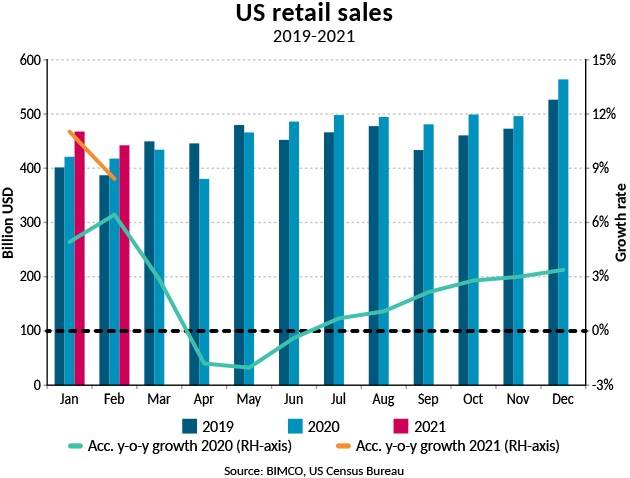 Ratio between imports and exports is going up
While on one hand container shipping is dealing with record high imports by the U.S., exports have fallen considerably. The ratio between loaded imports and loaded exports has risen to 4:1 in the port of Los Angeles, where the imbalance is particularly significant, while standing at 2.7:1 for all U.S. West Coast ports.

Houston, we have a problem
The congestion and long waiting times in the major West Coast ports have left many stakeholders looking for viable alternatives. For some shippers, this has included accepting the higher cost of air freight in return for a guarantee that the cargo would reach their customers on time. For other carriers it has meant diverting container ships to avoid the busiest U.S. ports.

These diversions include switching the San Pedro Bay ports with options further north, such as Oakland and Tacoma-Seattle, as well as ports further afield such as ports in the U.S. Gulf of Mexico. This includes the port of Houston, which has seen its inbound container volumes increase by 17.4% in the first two months of this year compared to the same period in 2020. Houston port also stands out as it has experienced an increase in loaded container exports from the start of last year, up 2.9%. This small increase is however overshadowed by a 13.1% increase in empty container exports. 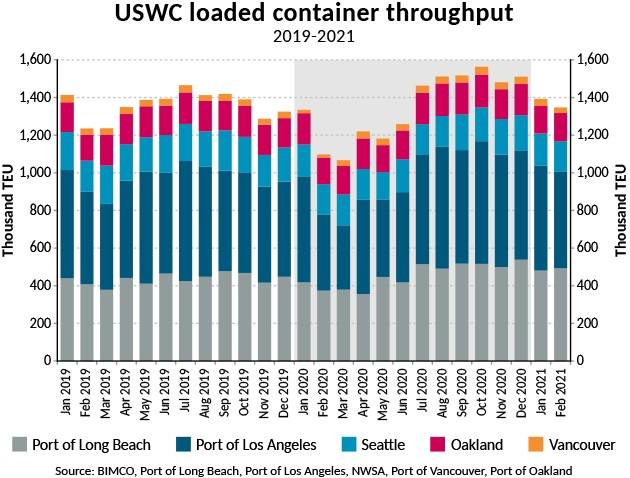 What’s next for U.S. demand for containerized goods?
While the current backlog will take many months to clear and consumer demand remains strong, focus is increasingly on what is coming next. The new $1.9 trillion stimulus package all but guarantees a strong rebound in the U.S. economy in 2021. This new round of spending, and in particular the $1,400 checks and extra unemployment benefits, will undoubtedly boost consumer spending. But what’s in it for container shipping?

Already in the first two months of this year, U.S. retail sales have grown by 8.4% compared with the start of 2020. However, coming in at $442 billion, retails sales in February were at the lowest level since April 2020 when store closures due to the pandemic caused a drop in retail sales. Even so, February 2021 retail sales are 14.3% higher than in February 2019.

This latest stimulus package will likely cushion the retail sales drop for the next few months. However, with the success of the U.S. vaccination program so far, and many states starting to lift restrictions, the share of service spending will start to recover. This will lower the potential upside for retail sales, as consumers are suddenly faced with more options as to where to spend their money and thereby also for container imports once we reach the summer months. In the past week alone, the number of U.S. flight passengers has risen to its highest level since the pandemic started. On March 21, the industry could record 1.5 million passengers, a 30.7% drop from the same day in 2019, but a 181.5% increase from March 21, 2020.

“With a rise in service spending and the most recent inventory/sales ratio at 1.32—the highest in nine months—U.S. demand for containerized imports cannot remain at is current levels for many more months. Once the current surge is dealt with and the backlog is cleared, which alone will take several months, container volumes and the spot freight rates will fall,” Sand says.

“However, even as the spot market comes down from its highs, carriers’ profitability is already assured this year as high-volume long-term contract rates are being locked in at very high rates for the next many months to come.”