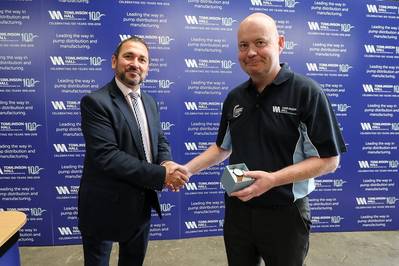 The region’s largest pump distributor and one of the few remaining British pump manufacturers – Tomlinson Hall – has paid recognition to its long serving staff as it celebrates 100 years in business.

Based in Billingham, impressively almost 65% of the company’s staff – comprising 25 members - have been with the business for more than 10 years. The firm chose to recognize its team members loyalty in a ceremony following its commemorative Royal visit from His Royal Highness The Duke of Gloucester KG GCVO last month.

Tomlinson Hall staff recognized for their efforts to the business included; Mark Dale, Sales Director, who was acknowledged for his 30 years’ service, Shirley Simpson, Export Manager, who has worked for the pump distributor for 26 years was also recognized on the day as were both Michael O’Hare, Workshop Manager, and Colin Simpson, Business Development Director, who jointly celebrated 25 years each with the business. Tony Keville, third generation Tomlinson and Managing Director at the company also celebrated 44 years with the company in its centenary year.

With special guests present at Tomlinson Hall, following on from the Royal visit, Steve Schofield, Director and Chief Executive at the British Pump Manufacturers Association (BPMA) presented commemorative long service watches and paid tribute to each of the team members receiving an award.

Operating from its facilities in Billingham comprising two workshops on its 1.5-acre site, Tomlinson Hall provides a full end to end service from pump selection, supply and site visits right through to servicing and repairs. The company works with leading businesses across Europe, the Middle East, North America, South America and Asia and is planning to enter these and other geographies more aggressively as part of its strategic growth plans.