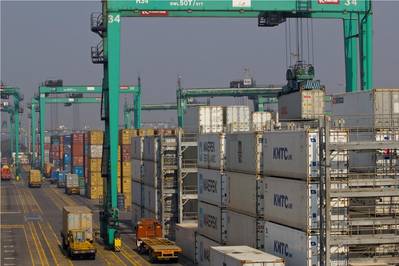 APM Terminals Mumbai became the first Indian container terminal to go paperless by providing shipping lines electronically with the required Export Form 13 for export containers entering the terminal by truck. Building upon the success of the Export e-Form 13, APM Terminals Mumbai has also introduced an ‘Online Import Delivery Process’ to simplify and streamline the import cycle of terminal operations to reduce gate waiting time and congestion, and enable faster container movements into and out of the terminal.

“By going live with the import delivery cycle, APM Terminals Mumbai has once again become a pioneer in providing transparency in the supply chain and ease of doing business” said APM Terminals Mumbai COO Ravi Gaitonde. The 2016 World Bank annual survey on “Ease of Doing Business” ranked India #130 out of the 189 nations in the study, up from #134 in 2015. For the category “Trading Across Borders”, the study ranked India #133. By comparison, Singapore ranks #1 in Ease of Doing Business, while China is #84, Sri Lanka is #107, Pakistan is #138, and Bangladesh is #174.

The web-based application allows Container Freight Stations (CFS’) registered with the terminal to get real-time updates on the status of import deliveries.  PIN numbers are established for an online submission of the tractor trailer (TT) number and cell phone number of the driver, triggering an SMS text message to the driver’s cellular number containing all information concerning the shipment and PIN. The application also has a feature for the CFS to generate a report listing all transaction events against the PINs generated for the selected period.

Mumbai and the Jawharlal Nehru Port (JNP) complex handled a record 4.48 million TEUs in 2015, with APM Terminals Mumbai the busiest of the four terminals, handling 1.91 million TEUs, or 43% of the port complex container volume for the year. India, with a population of 1.2 billion, is served by 13 publicly-owned “major ports”, under central government authority, and approximately 200 minor ports, governed by state authorities. To accommodate India’s projected population and economic growth, the Indian Government has called for USD $16 billion in port infrastructure investment, and improvements such as EDI to improve efficiency.