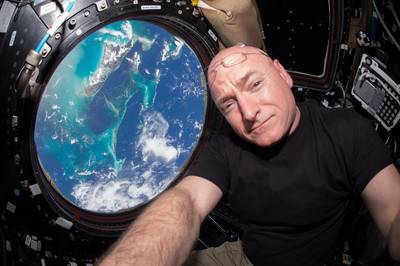 SUNY Maritime College will host its annual Admiral’s Scholarship Dinner May 3. This year’s event, organizers say, will be “out of this world.”
Tom Higgins, ’80, executive vice president and chief administrative officer of First Data, a global payment technology solutions company based in Atlanta, will be the event honoree. NASA astronaut Capt. Scott Kelly, ’87, who spent the last year in space aboard the International Space Station, will receive special recognition at the event’s pre-dinner reception
“Our alumni and other friends of the college contribute greatly to making a SUNY Maritime degree affordable for hundreds of students,” said Rear Adm. Michael A. Alfultis, college president. “Again this year, we expect the dinner to be a great success that it will go a long way to helping our students. We are also excited to celebrate two of Maritime’s outstanding alumni, Tom Higgins and Scott Kelly.”
Higgins leads First Data’s division responsible for cyber security, physical security, business resiliency and crisis management. He also manages its global sourcing, general services, aviation and real estate functions. Higgins is the driving force behind First Data’s military and veterans affairs efforts as well. Before he joined First Data, Higgins was head of operational control at JP Morgan Chase & Co. and managed the company’s military and veterans initiatives. A veteran of the U.S. Navy, he had a 24-year career with the federal government, working in national security and foreign policy.
After Higgins graduated from SUNY Maritime, he attended the Naval War College and the JFK School of Government at Harvard’s program on leadership for senior executives.
Kelly joined NASA as an astronaut in 1996 and is best known for being the American to spend the longest time in space on one mission; he spent nearly a year in space, about half of that time as the commander of the International Space Station. He returned to Earth in March. This record setting trip will help NASA scientists understand how the human body copes with long space voyages in preparation for a future manned mission to Mars. Having traveled in space a total of four times, Kelly announced his retirement after his latest return from the International Space Station.
After Kelly graduated from SUNY Maritime, he earned a master’s degree in aviation systems from the University of Tennessee. He was designated a naval aviator in 1989 and worked as a fighter pilot and, later, a test pilot. He has logged more than 8,000 hours in more than 40 different aircraft and spacecraft and has more than 250 aircraft carrier landings.
The Admiral’s Scholarship Dinner is the college’s primary vehicle to raise funds for student scholarships. Each year, nearly $1 million in scholarships is awarded to academically strong students who demonstrate financial need. Last year, more than $600,000 was raised at the event.
• aviation systems • crisis management • Federal government