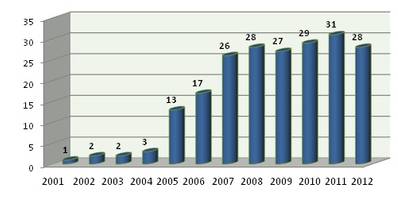 Findings of the fifth Annual Review of the Hellenic Observatory of Corporate Governance (HOCG) about the presence of the Women in the Board of Directors (BOD) of Greek Maritime Listed Companies show that women hold less than 5% of BOD positions, and a remarkable high 76.5% of maritime companies do not have any women in their BOD at all.

The total number of directors was 259 (96%) after excluding mobility and cross directorships. Out of these, 249 (96%) were men; while there were only 10 female directors (4%). Only one woman was simultaneously the Chairman and the CEO of three different maritime companies (Navios Maritime Holdings, Navios Maritime Partners and Navios Acquisition.

The results were presented by Aspasia Pastra and Dr. Dimitrios Koufopoulos at the World Maritime University at The Conference Maritime Women: Global Leadership 2nd International Conference, which took place in the Malmo of Sweden from March 31 to April 1.