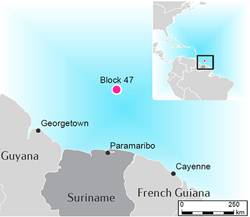 Statoil has acquired a 30% participating interest in block 47 offshore Suriname from Tullow Oil. Tullow Oil operates the block 47 licence offshore Suriname with 100% working interest. Tullow will retain the operatorship and 70% working interest. The agreement is subject to approval from Staatsolie Maatschappij Suriname, the state oil company of Suriname.
Block 47 lies in a frontier area in the Guyana Basin. The licence is located some 270 kilometres north of mainland Suriname, with a water depth of between 1,300 and 3,000 metres. A recent discovery offshore nearby French Guyana is a promising indication of the potential in the region. "This cooperation is about executing on Statoil's exploration strategy of securing early access opportunities with emerging potential. This frontier opportunity constitutes an important part of our growing international portfolio," says Pål Haremo, senior vice president in Exploration Global new ventures in Statoil.
The next step is to acquire and interpret seismic data in order to mature the acreage further. Tullow Oil is one of the largest independent oil and gas exploration and production companies in Europe and was founded in Ireland in 1985.
The company focuses on Africa, Europe, South Asia and South America as exploration and production regions.
The farm-in to block 47 in Suriname marks Statoil's first entry into the country. Statoil holds assets in neighbouring Brazil as well as in Venezuela.
• Tullow Oil • Statoil • Suriname