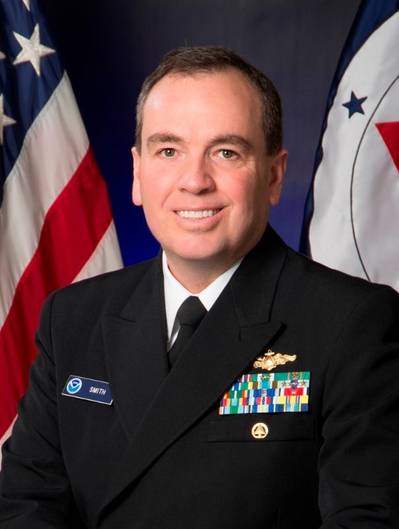 President Barack Obama has approved the promotion of Shepard Smith, from captain to rear admiral (lower half), a prerequisite for Smith to become director of NOAA's Office of Coast Survey, after his selection by Department of Commerce Secretary Penny Pritzker. Smith's appointment to director will be effective on August 26, 2016.

Smith will oversee NOAA's charts and hydrographic surveys, ushering in the next generation of navigational products and services for mariners who need integrated delivery of coastal intelligence data. He succeeds Rear Adm. Gerd Glang, who will retire on September 1 after a 27-year NOAA career. Glang served almost four years as Coast Survey director, leading NOAA's transition from a paper-based nautical charting system to a full digital system.

Smith has served with NOAA for 23 years, during which time he has been deeply involved in advancing the state-of-the-art in hydrography and nautical cartography. His 11 years as a field hydrographer continue to this day, as he currently serves as the commanding officer of NOAA Ship Thomas Jefferson. He previously served as the chief of Coast Survey's Marine Chart Division, managing the privatization of paper chart printing and distribution.

In addition to his three tours on Thomas Jefferson (twice as her commanding officer), Smith also served on NOAA Ship Rainier, surveying in Alaska, and as the officer-in-charge of the Research Vessel Bay Hydrographer. He served on the interagency response teams for the search and recovery of TWA flight 800, EgyptAir flight 990, and the private plane piloted by John F. Kennedy, Jr. He commanded Thomas Jefferson during her six weeks response to the Deepwater Horizon oil spill.

For his shore assignments, Smith served as the chief of Coast Survey's Atlantic Hydrographic Branch, and as Coast Survey's deputy hydrographer, as well as chief of the Marine Chart Division. Smith also served as the deputy director of the Office of Response and Restoration, on the staff of the U.S. Coast Guard LANTAREA headquarters, and as a senior advisor to the Assistant Secretary of Environmental Observation and Prediction. He was the NOAA representative to the Allied Maritime Sub Group, and was part of the U.S. delegation to the International Hydrographic Organization's (IHO) Hydrographic Services and Standards Committee.  He served as the chairman of the IHO Data Quality Working Group.