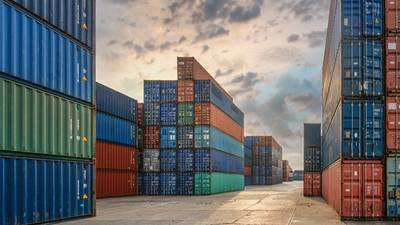 Shipping lines and container owners in North America (majorly in the U.S.) are finding it difficult to return containers to China. To add to the present challenges, the U.S. is also facing major trucking issues that are making cargo movement within the country difficult.

“What is happening in the U.S. is that there is already congestion, like every year, because it is the peak shipping season, and everyone is trying to make sure that retailers have enough inventory on the shelves for the upcoming holiday and Christmas season. The U.S. West Coast labor negotiations due to which many freight forwarders rerouted the cargo to the U.S. East Coast have now caused congestion on the U.S. East Coast too. Hinterland complications like acute shortage of truckers and rail delays are adding to the woes. All in all, there are many challenges that will impact a smooth container movement into the peak season,” said Christian Roeloffs, cofounder and CEO, Container xChange.

“Empty containers piling up at the depots in the U.S. and containers stuck on the sea (owing to the congestion) will contribute to capacity being tied up.”

“On the supply side, there is an excess of containers while due to recessionary fears and inflation, the consumer demand has softened. Nonetheless, we are sliding into the peak season, and this is the busiest season of the year. The average container prices traditionally increase in China and Southeast Asia during the peak shipping season, and we do expect to see a rise in the prices in the coming weeks. In the mid-term, what could possibly change this year is the relatively smaller degree of increase in average container prices owing to several disruptions.”

According to the report published today, the average container prices for cargo-worthy containers of all types in the region rose from $2116 in July to $2214 in August.

In North America, the US saw a 7.3% increase in per month trading prices for cargo-worthy containers of all types - this refers to the percentage difference in comparison to the previous month. Canada, on the other hand, saw a 15.28% dip.

“This situation of empty containers piling up in the U.S. and in the Europe will lead to tighter depot space, carriers will rush to get rid of their older equipment, and second-hand container prices will continue to slide.”

Container Availability Index (CAx) at record highs
While globally the supply chain disruptions were slowly easing up, there is still no sure end to shipping troubles in sight. In week 35, the U.S. ports including Houston, Oakland, New York City, Savannah, Long Beach and Los Angeles kept up their high CAx scores (above 0.80) from last month (while the ideal balance level is at 0.50 meaning the same number of containers are moving out as are moving in at a given port. If this index number rises, then it means there are more containers coming in than going out). While the congestion seems to be easing in the ports on the west coast, container movement in the U.S. faces many problems before it improves.

“The lockdowns in China will further make the situation difficult for shippers and freight forwarders to move the cargo from China to the U.S. Much chaos on the cards coming winters.”