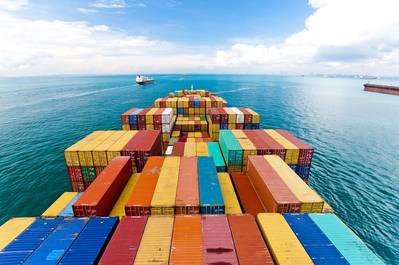 The World Health Organization (WHO) has declared the outbreak of the novel coronavirus a pandemic. There is little doubt that this will have significant implications for the shipping industry. But to what extent? BIMCO expects that the strict containment measures imposed by governments around the world will result in substantially lower global economic growth and consequentially, lower demand for shipping. Container and dry bulk shipping are at the front line when it comes to feeling the fallout, while the oil tanker segment will benefit from the flood of Saudi Arabian crude oil.

Are we really seeing a black swan?
First and foremost, the coronavirus represents a humanitarian crisis. Several of the large Western economies, such as Germany, France and the US, are implementing restrictive measures to minimize the number of new coronavirus cases, including wide-ranging shutdowns and temporary restrictions on the free movement of people. Citizens are urged to stay inside, and companies are implementing work-from-home initiatives, including BIMCO. While these steps are necessary, it will unavoidably come at a high cost. As economies feel the pinch of these measures, the economic outlook continues to worsen.

As we entered the decade in January 2020, the economic outlook remained strong with the International Monetary Fund (IMF) projecting a pick-up in GDP growth from 2019. Yet, these forecasts are based on historic data and the coronavirus represents a black swan – a situation which is rarely seen on such a scale. Parallels are drawn to past epidemics, such as the SARS outbreak in 2003, but this time, the setting is radically different.

The hit on the Chinese economy in February provides some indication as to how the virus will impact the advanced economies in Europe and the western hemisphere.

The widespread quarantines in China in February coincided with holiday celebrations of the Lunar New Year, which caused large parts of the work force to be stuck in foreign provinces. China’s Purchasing Managers’ Index (PMI) readings nosedived by 14.3 index points in February to 35.7 points, representing an unprecedented contraction.

Chinese import figures highlight that the coronavirus has had a less marked impact on import volumes than could have been feared. The headline commodities relevant for shipping, including coal, iron ore, crude oil and soya beans, are all up year-on-year in the combined period of January-February. Coal imports rose by 33% in the same period, largely on the back of cargoes, which were delayed in customs clearances through December to curb the exceeds of the annual coal import quota. 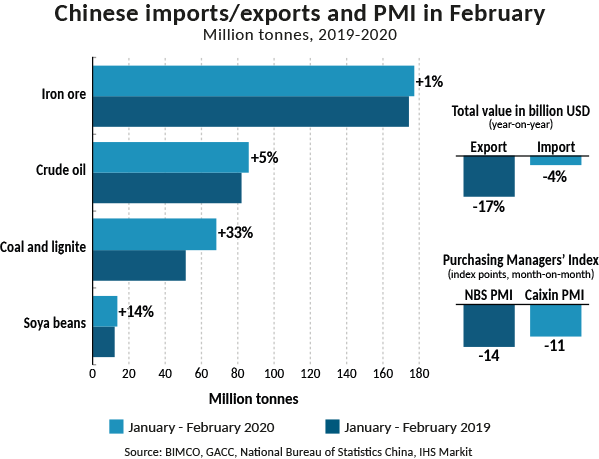 The data suggest that the drastic containment efforts cleaved through the Chinese economy, with industrial output and manufacturing at the front lines, as factories were either temporarily closed or did not have adequate supply of labor. Similarly, consumer spending and corporate investment activity were substantially hit, as well as imports and exports.

Dry bulk shipping saw little demand from China during the lockdown
For dry bulk shipping, the large-scale quarantine measures throughout China has protracted the seasonal slump of dry bulk freight rates. The markets usually rebound during March and April, and nearly all dry bulk sub-segments, except Capesize, have largely been in line with this seasonality. A seasonally strong harvest in South America has partly contributed to the climbing Supramax and Handysize freight rates. Read more here: Capesize sector submerged in the depths of despair from our 10 March analysis.

The Capesize sub-segment remains shackled in extraordinarily loss-making territory, sitting at USD 2,800 per day on 17 March 2020. This has partly been caused by the slow Chinese demand, but also seasonal factors and the IMO 2020 Sulphur Cap.

Geopolitics buoys the tanker market
Tanker shipping similarly felt the impact in February, but certainly to a lesser extent, given that geopolitics ultimately determine the fate of that market. The freight rates briefly dipped into non-profitable territory in early February but have since then drastically bounced back after the OPEC+ alliance negotiations fell apart on 6 March, prompting Saudi Arabia to flood the market with crude oil from April.

Nonetheless, the lower refinery runs, large-scale air travel cancellations and fewer vehicles on the Chinese roads have adversely impacted the Chinese demand for crude oil. Yet, as the gears of the Chinese economy grinds back into motion, demand for oil products will most likely start to pick up.

Idle container ship capacity at a record 11% - 2.5m TEU
The container shipping industry has similarly felt first-hand what a prolonged shutdown of China feels like. While the impact has been less evident in the freight rates out of China, it has certainly been painfully clear in the record-breaking amount of blanked sailings with idle container capacity reaching 2.46 TEU on 2 March 2020. The level is higher than what was seen in the wake of the financial crisis (source: Alphaliner). 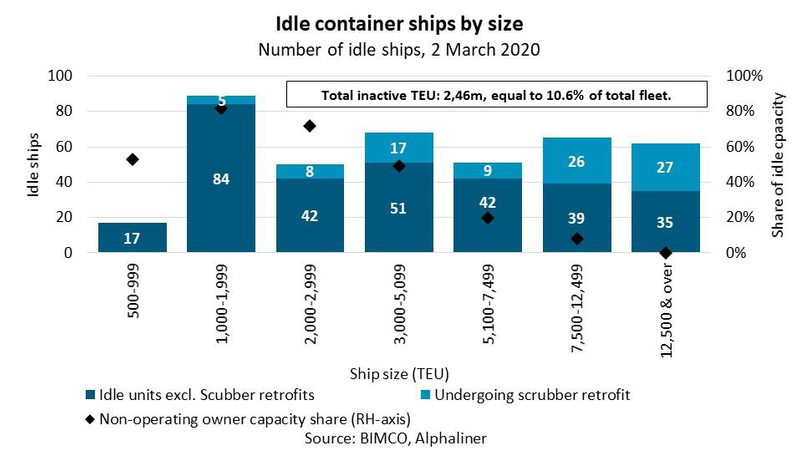 Recession alarms sound as quarantines become commonplace
With nation-wide lockdowns implemented in major western economies, it seems likely that we will see somewhat of a repeat of the economic impact seen in China. Given the massive uncertainty and global spread, the outlook however, can change from day to day.

Yet, if going by the following assumptions, the approximate fallout can be sketched out.

As cases start to exponentially increase in advanced economies around the world, governments will be forced to quarantine large parts of the population. The radical, but necessary, containment measures will deliver a substantial hit to economic growth in these economies and thus also affect global GDP growth.

On the demand side, consumer spending will take a substantial hit. As already seen, airplane travel and tourism will decline dramatically and all businesses relying on robust household consumption will be impacted. As consumer confidence weakens and uncertainty mounts, consumers will hold off on big-ticket items, in turn limiting demand for manufactured goods, which could prompt layoffs in the manufacturing sector.

With the outlook fraught by uncertainty, capital lenders will require higher risk premiums, thus driving up the cost of capital and reducing corporate investments.

As governments increasingly quarantines parts of the population, a shock is induced to the supply side. Parts of the labor force are prohibited from going to work, hereby imposing a constraint on global manufacturing activity and industrial production. 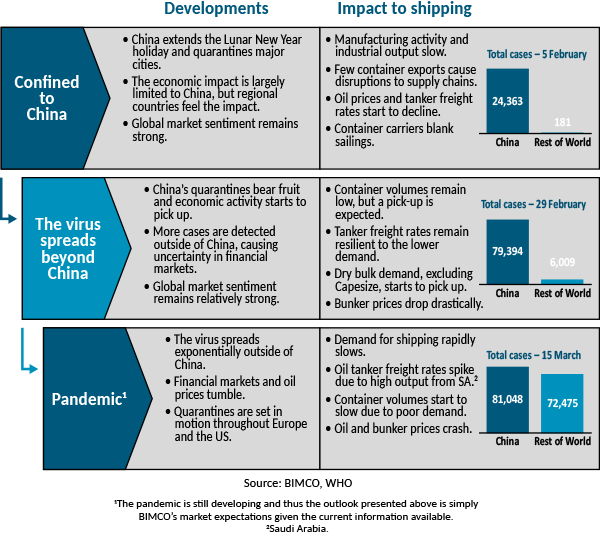 Central banks, many of which have limited room to maneuver, will cut interest rates and use available stimulus measures in a bid to dampen the impact. On 15 March 2020, the US Federal Reserve System (Fed) decided once again on another emergency cut of 100 basis points to the federal funds interest rate, which had little effect in calming the markets. A cut to the interest rate seems to be insufficient if there are no cuts to the rate of infection.

An extraordinary flu requires extraordinary measures
When synthesizing these assumptions, it is painstakingly clear that this is no longer an ordinary flu with a transitory effect on the outlook. The global economy is faced with a pandemic, and it seems likely that GDP growth will dip into technical recession territory. Even the often-optimistic US president, Donald Trump, has admitted that the country’s economy could face recession. As the virus spreads globally, economic growth will deteriorate and any potential cracks in the surface will be uncovered in the process.

The exogenous demand shock to the global economy will evaporate at some point and a recovery will follow. There will be light at the end of the tunnel but reaching that point could take a relatively long time, dependent on the nature of the recovery. Following the SARS epidemic in 2003, the Asian countries rebounded sharply in a V-shaped recovery and lost ground was quickly recovered. However, the coronavirus presents a broader challenge, and BIMCO estimates that the recovery will be more of a U-shaped recovery, where the virus will continue to put a drag on global output for the rest of the year.

Finally, an L-shaped recovery presents a scenario where structural damage is inflicted upon the global economy, but this currently seems unlikely to happen given current information available.

Shipping feasts on stable economic growth and accordingly, all segments will feel the fallout from the pandemic. Yet, assuming a U-shaped recovery, the prospects are better for some segments than others.

Demand is slowing for liquid fuels as Saudi Arabia boost supplies
The crude oil tanker segment has remained largely asymptomatic, even when faced with the dropping demand for liquid fuels. Since negotiations of the Organization of the Petroleum Exporting Countries (OPEC) fell through on 6 March, the crude oil tanker freight rates have skyrocketed to USD 279,259 per day on 13 March 2020, largely driven by the Saudi Arabian pledge to flood copious amounts of crude oil into the market. The question persists whether any countries have enough storage capacity to accommodate the massive volumes.

A similar freight spike was seen in the fall of 2019 when the US imposed sanctions on a large Chinese tanker company, effectively removing a large chunk of capacity from the tanker fleet. 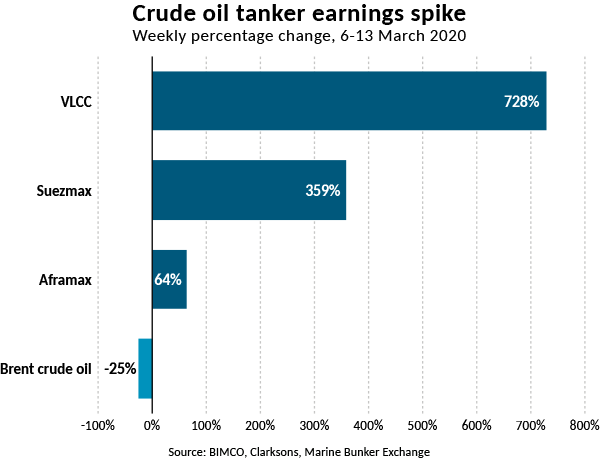 Yet, these spikes encapsulate an unbalanced market in a smokescreen. Saudi Arabia’s oil break-even price is well above current prices and thus, the current levels of output will not be sustained for a longer period. Nonetheless, the plummeting oil prices will temporarily provide importers with an incentive to ramp up imports, while it also holds certain implications for floating storage.

When looking past the temporary events, the medium-term outlook is shaping up quite gloomy. With slower economic growth, the overall demand for oil products will decline. When combining this with changes to consumer behavior, such as large-scale flight cancellations around the world and a more idle population, the prospects are not looking good. The effects amount to the destruction of demand and it will be difficult to make up for, once a recovery comes around.

The shutdown of China in February put massive pressure on liquid fuels demand growth. As the advanced economies in the West rush to limit the spread, a similar decline for oil in the western hemisphere will take place.

Container volumes are expected to slow – even with China back in the game
Inventories are running low, supply chains and retailers need to stock up intermediate and finished goods, and with the Chinese manufacturing industry recovering, container volumes will start to pick up.

However, in the coming months, the growth of container volumes could start to stagnate or even decline, as consumer confidence deteriorates across advanced economies.

Even before the outbreak of the coronavirus, BIMCO had expected the multiplier to hover around 0.8-1.0 in 2020. Yet, the global economy is now at the mercy of the coronavirus and it would probably have to be a V-shaped recovery for global container volumes to grow compared to 2019.

When the outbreak was confined to China, it primarily represented a supply-side shock to the global supply chains with fewer containerized goods being shipped from China. 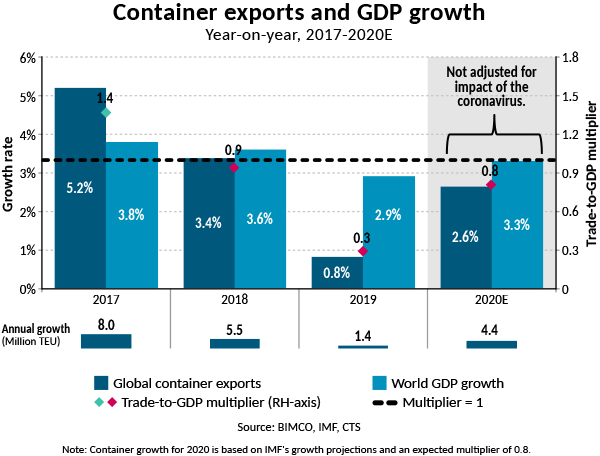 Is there a dry bulk recovery on the horizon?
As China accounts for 35% of all dry bulk imports, any positive development in the country translates into a more positive outlook for the dry bulk market.

A split market has essentially been carved up within the dry bulk segment, where the Capesize market is stuck in the doldrums, while Panamax, Supramax and Handysize are climbing towards break-even levels.

The Capesize sub-segment certainly seems to have caught the coronavirus, with only few spot cargoes going out from Brazil and lower Brazilian iron ore exports in general. Other data suggest that Chinese steel production held up well in January/February, growing 3.1% year-on-year.

To make up for the widespread quarantines of large parts of China in February, it is expected that China will roll out fiscal stimulus to support economic growth, which could prompt somewhat of a Capesize recovery.

Dependent on the extent of the stimulus rollout, it could somewhat insulate the dry bulk segment from the growth slowdown in the rest of world. In the past decade, Capesize demand has been dominated by the build-up of Chinese infrastructure, but the stimulus this time could increasingly be directed at boosting consumer spending and bringing domestic operations of any kind back on track, offering little boost from that to the Capesize sector. 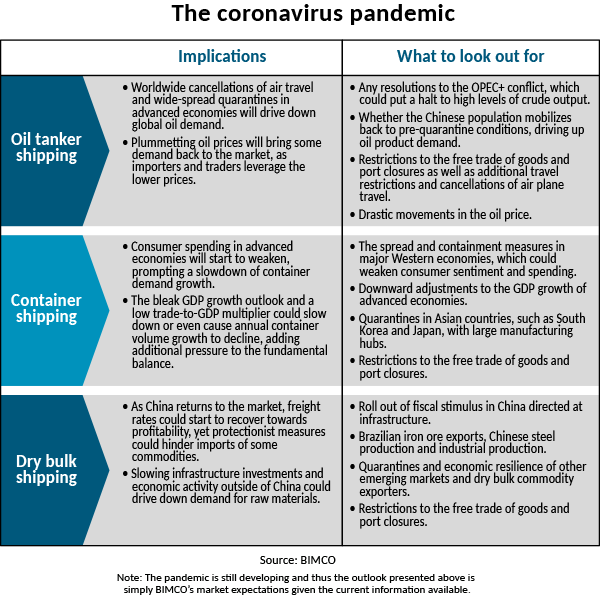