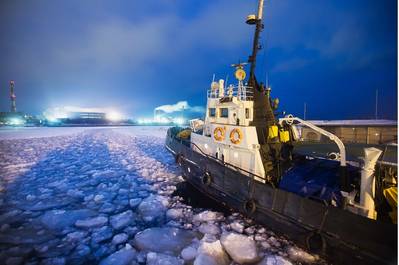 Serbia deployed three icebreakers on Tuesday to smash ice blocks jamming parts of the Danube river and prevent damage to bridges and ships moored along the waterway.

Serbia's only icebreaker and two more vessels that arrived from neighbouring Hungary ploughed through the thick ice to free it up to move downstream.

Dozens of smaller boats and floating homes have been damaged or destroyed over the past week along a stretch of the Danube in Belgrade as ice ripped through marinas and moorings.

Serbian officials said they were concerned that accumulated ice could raise water levels and contribute to flooding.

"The most critical situation is near Belgrade and near Kladovo (250 kilometres east from Belgrade)," said Veljko Kovacevic, assistant minister in the ministry of construction, traffic and infrastructure.

"The situation is under control," he told Vecernje Novosti daily.

Last week, Serbia halted navigation on the Danube river because of the danger the ice blocks presented, forcing oil and petrol retailers to seek alternative ways of transportation.