US Senators Alarmed if China Gets Control of Djibouti Port 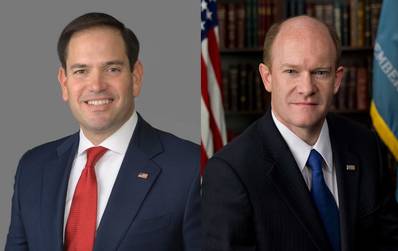 Two prominent U.S. senators expressed alarm on Tuesday about the military and political consequences if China gains control of a port terminal in Djibouti, and said they were concerned it could further boost Beijing's influence in East Africa.

In a letter to Secretary of State Mike Pompeo and Secretary of Defense Jim Mattis, Republican Senator Marco Rubio and Democratic Senator Chris Coons said they were concerned about Djibouti's termination of a contract for the Doraleh Container Terminal with United Arab Emirates-based DP World in February and the nationalization of the port in September.

Reports that Djibouti, heavily indebted to Beijing, would likely cede the port's operations to a Chinese state-owned enterprise were "even more alarming," they said.

The letter was the latest in a series of efforts by members of Congress who want to counter China's growing international influence, which they see as a threat to U.S. economic and security interests.

Trump has been focusing on the economic threat from China and has brought the two countries to the brink of a trade war, but many in Congress want to ensure the administration also treats the country as a security threat.

A tiny nation strategically located at the southern entrance to the Red Sea on the route to the Suez Canal, Djibouti became home to China's first overseas military base last year. A U.S. base located just miles away stages operations against Islamic State, al Qaeda and other militant groups.

Rubio and Coons sent Tuesday's letter as lawmakers returned to the Capitol for the first time in several weeks after congressional elections on Nov. 6.

The Senate last month passed legislation overhauling the way the federal government lends money for foreign development, in a shift meant largely as a response to Chinese influence.

U.S. officials say they worry about what they call China's "debt trap" diplomacy, in which countries end up giving up control of major assets such as ports or roadways when they fund infrastructure projects with Chinese loans that they cannot pay back.