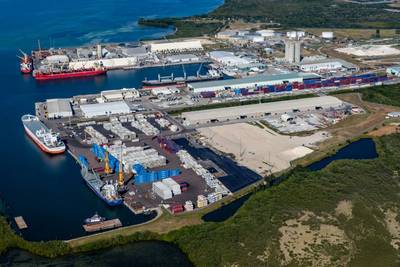 SeaPort Manatee on Florida's west coast keeps setting across-the-board activity records, highlighted by an upsurge of more than 32% in containerized cargo tonnage in the six-month period ended March 31 over the comparable year-earlier fiscal half.

During the first six months of its current fiscal year, the Florida Gulf Coast trade gateway handled an all-time high of 660,847 short tons of containerized cargo, up 32.2% from the first half of fiscal 2021, while also establishing a record for twenty-foot-equivalent container units, with the 85,383 TEUs moving across SeaPort Manatee’s docks being a 26% increase over a year earlier, according to figures released today [Tuesday, April 19].

“SeaPort Manatee’s sustained growth in all sectors of cargo activity demonstrates continuing ability to adeptly meet the needs of consumers and industry throughout Central and Southwest Florida and beyond,” said Carlos Buqueras, executive director of Manatee County’s global trade hub, which in February was rechristened as SeaPort Manatee. “With completion of expansion of dockside container yard facilities and other infrastructure enhancements, as well as thousands of on- and near-port acres available for future growth, SeaPort Manatee is perfectly poised to keep moving even more commerce.”

The new container marks were facilitated by volume growth for both of the port’s primary containerized cargo carriers – SeaPort Manatee-based World Direct Shipping and Coral Gables, Florida-headquartered Fresh Del Monte Produce Inc. WDS, in its ninth year importing produce and other goods from Mexico, has expanded its cross-Gulf service offerings, while the Del Monte unit has deployed eco-friendly containerships to bring Latin American fruit to the Southeast distribution center it has operated at the port for 33 years.

Other records set by SeaPort Manatee in the six-month period ended March 31 include:

“The remarkable ongoing activity gains at SeaPort Manatee are a testament to our ability to provide leading-edge facilities for efficient movement of a wide range of vital goods,” said Reggie Bellamy, chairman of the Manatee County Port Authority. “Meanwhile, a team of expert consultants, in concert with a broad spectrum of stakeholders, is working to complete a blueprint for further growth and still-greater contributions to our region’s economy.”