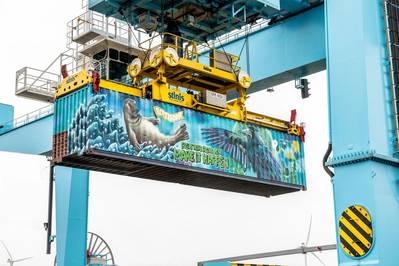 The Port of Rotterdam Authority has announced that it has participated in ‘Noah’s Train’ as part of the Rail Freight Forward (RFF) initiative, a collaborative effort to cut freight transport emissions by 30% by 2030.

The longest mobile work of art and ambassador of the RFF initiative, Noah’s Train, is an initiative launched by several European railway companies to promote freight transport by rail. Gathered in the Rail Freight Forward coalition, they defend a common goal: reducing the environmental impact of freight transport in Europe.

The tour a collaborative venture of around 20 rail operators in Europe. RFF aims to achieve 30 percent of freight transport by rail by 2030; this is currently 18 percent.

According to the initiators, if this objective is achieved it will save an annual 1 million trucks on the roads and will reduce CO2 emissions by 290 million tonnes. The campaign ‘Noah’s Train’ matches the Port Authority’s ambition to transform Rotterdam into a climate-neutral port.

Rotterdam’s contribution was painted by Nina Valkhoff, which means that ‘Noah’s Train’ is now complete and the containers will be distributed, separately, across the world. One container is going to the climate conference in Chile.

The Rotterdam version will stay on Maasvlakte for the time being. One of the four sides of this steel cargo container is still blank and will soon be located at the car park of FutureLand, the Rotterdam port information center, where it will be sprayed and covered with the sustainable wishes of Rotterdam’s youth.