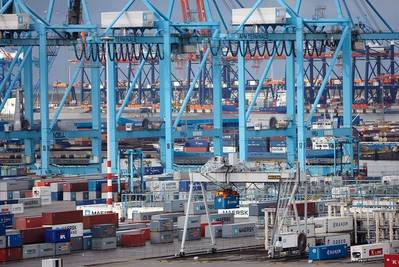 The port of Rotterdam, Europe’s largest, continued to grow in 2017 spurred by a significant gain in container throughput, which increased by 1.3% to 476 (461) million tonnes with the port returning to the growth trend seen before 2016.

Particularly strong growth in container throughput of 12.3% (in tonnes) was the main driver of growth in the port of Rotterdam throughout 2017. Total cargo throughput rose by 1.3%, with the port returning to the growth trend seen before 2016.
The increase in containers was offset by a fall in dry bulk of 2.6% and in wet bulk of 4.1%. Break bulk (Roll on/Roll off and other break bulk) increased by 7%.
Allard Castelein, CEO of the Port of Rotterdam Authority: 'The port of Rotterdam has had a good year. Led by the container sector, goods throughput rose to a record level. The container sector is particularly important because it plays an essential role in creating added value such as employment in the port and the hinterland."
He added: "The Port Authority supports the goal stated in the Dutch coalition agreement to reduce CO2 emissions to 49% of the 1990 level by 2030. To make this happen, we are now appraising a large number of projects.
The Port of Rotterdam Authority booked a turnover of € 712.1 million in 2017, an increase of 4.6% by comparison with 2016. Net profit amounted to € 187 million, a fall of 16.6% due to the fact that the Port of Rotterdam Authority was subject to corporation tax with effect from 1 January 2017.
The mission of the Port of Rotterdam Authority is to create economic and social value by achieving sustainable growth in collaboration with clients and stakeholders. After the payment of the dividend and repayment of debts, the profits made by the Port Authority are invested in the further development of the port.
• Allard Castelein • Europe • Port Authority