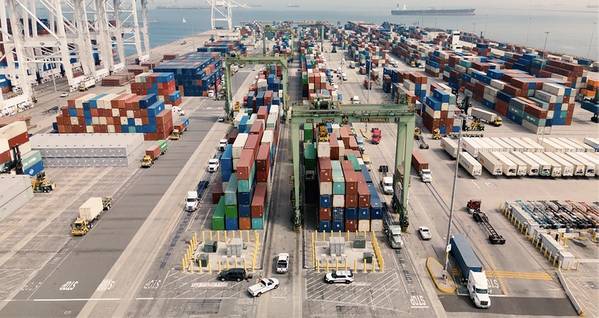 Longshore workers are using nine electric cranes to stack containers at one of the Port of Long Beach’s busiest terminals in a large-scale demonstration project as the Port and its partners pursue a goal of a zero-emissions cargo handling fleet by 2030.

The demonstration at SSA Marine Pier J is part of the Zero-Emissions Terminal Equipment Transition Project, which is funded in large part by a $9.7 million California Energy Commission grant. The Port, the CEC and Southern California Edison are partnering on the project to put into daily service 21 human-operated vehicles that are zero- or near-zero emissions at three of the Port’s marine terminals and trucking company Total Transportation Services Inc. to test their performance in a real-world setting. As part of the project, SSA retrofitted nine of its existing diesel-powered rubber-tired gantry cranes to run on electricity, recently completing the last one.

“In the decades since we created the Green Port Policy, our ambitions have grown from cleaning the air for our community to showing the world it’s possible to do that everywhere,” said Port of Long Beach Executive Director Mario Cordero. “These demonstrations are designed to commercialize heavy-duty zero emissions equipment and vehicles to combat pollution but also to fight climate change, the effects of which we are seeing in the news almost every day.”

“We thank SSA Marine, the ILWU and our many partners for their collaboration in helping us remain the greenest port in the United States,” said Long Beach Harbor Commission President Sharon L. Weissman. “The future is zero emissions, and we are going to continue to do everything we can to lead the industry.”

“SSA is thankful for the opportunity to partner with the Port of Long Beach and the California Energy Commission to complete this project,” said Scott Hainlen, Superintendent at SSA Terminals. “We look forward to continuing our efforts in reducing emissions from all our operations in Long Beach.”

In 2017, the ports of Long Beach and Los Angeles approved an update to their Clean Air Action Plan, setting a goal of transitioning all terminal equipment to zero emissions by 2030 and drayage trucks by 2035.

The Zero-Emissions Terminal Transition project is anticipated to annually reduce greenhouse gases by more than 1,323 tons and smog-causing nitrogen oxides by 27 tons.