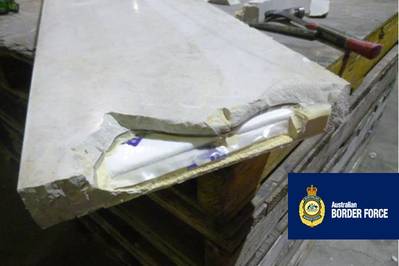 Marble which has been deconstructed to show the illicit substance. (Photo: Australian Border Force)

Australian authorities are reporting a record seizure of methylamphetamine after another metric ton of the illicit drug was discovered at Sydney's Port Botany.

The development comes after detectives attached to the State Crime Command's Drug and Firearms Squad earlier this year commenced Strike Force Chellington to investigate the importation of illicit drugs into New South Wales.

Acting on intelligence, Australian Border Force (ABF) officers examined a number of sea cargo containers, which had arrived into Port Botany last month. During a subsequent deconstruction of the consignment, it was found to contain 748 kilograms of methylamphetamine concealed within marble stone. Strike force investigators seized the drugs and commenced further investigations, which resulted in the arrest and charge of three men – aged 24, 26 and 34. They remain before the courts.

As part of ongoing inquiries, ABF officers examined an additional number of containers that had arrived via sea cargo at Port Botany last week, revealing another 1,060 kilograms of methylamphetamine concealed in the same marble stone method.

In total, more than 1,800 kilograms of 'ice' – which has an estimated potential street value of more than A$1.6 billion (US$1.1 billion) – has been detected and seized during this investigation, ABF said.

Further forensic analysis will be undertaken and investigations under Strike Force Chellington continue; no charges have been laid in relation to the additional consignment. State Crime Command Acting Director of Operations, Detective Chief Superintendent John Watson, said police are continuing to investigate activities of the syndicate, with further arrests not ruled out. “We will allege this syndicate was extremely well connected in several corners of the globe.

“The fact that we have seized a further tonne – potentially 10 million street deals – of this insidious drug just shows how little regard these types of groups have for the wellbeing of the community. Combined with the seizure from earlier this month, NSW Police and ABF officers have stopped more than 1.8 metric tons of 'ice' at the border – this is now the largest 'ice' bust in Australian history. It's once again proof that through the collaboration of all our partner law enforcement agencies, we will continue to stop this dangerous drug from hitting our streets," Det Ch Supt Watson said.

ABF Assistant Commissioner East, Erin Dale, said the detections exemplify the capability and diligence of ABF officers in protecting the Australian community. “Our officers are highly trained and continue to demonstrate their skills when it comes to detecting the importation of illicit drugs, no matter what method of concealment the organized crime groups use.

“The audacity of these individuals to think they could import such vast quantities of harmful drugs into Australia is astounding. Let's be clear: this is the largest seizure of methylamphetamine at the Australian border and therefore a massive blow to organized criminals," Assistant Commissioner Dale said. “ABF's continued work with law enforcement partners ensures the Australian community is kept safe from the importation of dangerous drugs."