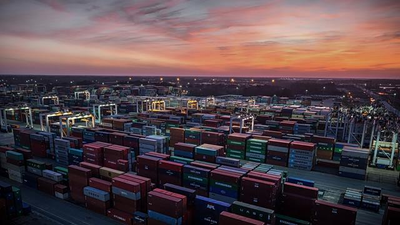 The Georgia Ports Authority's busiest April ever pushed its fiscal year-to-date totals to more than 3.4 million twenty-foot equivalent container units, an increase of 8.8 percent (280,000 TEUs) compared to the first 10 months of FY2017.

"We're on track to move more than 300,000 TEUs in every month of the fiscal year, which will be a first for the Authority," said GPA Executive Director Griff Lynch. "We're also anticipating this to be the first fiscal year for the Port of Savannah to handle more than 4 million TEUs."

April volumes reached 356,700 twenty-foot equivalent container units, up 7.1 percent or 23,700 units. As the fastest growing containerport in the nation, the Port of Savannah has achieved a compound annual growth rate of more than 5 percent a year over the past decade.

"As reported in the recent economic impact study by UGA's Terry College of Business, trade through Georgia's deepwater ports translates into jobs, higher incomes and greater productivity," said GPA Board Chairman Jimmy Allgood. "In every region of Georgia, employers rely on the ports of Savannah and Brunswick to help them become more competitive on the global stage."

To strengthen the Port of Savannah's ability to support the state's future economic growth, the GPA Board approved $66 million in terminal upgrades, including $24 million for the purchase of 10 additional rubber-tired gantry cranes.

"The Authority is committed to building additional capacity ahead of demand to ensure the Port of Savannah remains a trusted link in the supply chain serving Georgia and the Southeast," Lynch said.

The crane purchase will bring the fleet at Garden City Terminal to 156 RTGs. The new cranes will support three new container rows, which the board approved in March. The additional container rows will increase annual capacity at the Port of Savannah by 150,000 TEUs. The RTGs will work over stacks that are five containers high and six deep, with a truck lane running alongside the stacks. Capable of running on electricity, the cranes will have a lift capacity of 50 metric tons. The cranes will arrive in two batches of five in the first and second quarters of calendar year 2019.

Also at Monday's meeting, the GPA Board elected its officers, with Jimmy Allgood  as chairman, Will McKnight taking the position of vice chairman, and Joel Wooten elected as the next secretary/treasurer.