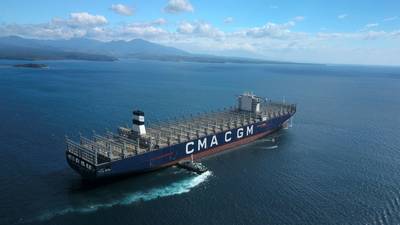 Shipping group CMA CGM said it planned to raise $2 billion to help finance its takeover of CEVA Logistics, with half the cash coming from selling port assets to its joint venture with China Merchants Port Holdings Co.

CMA CGM said it was pushing back some of Switzerland-based CEVA's financial targets by two or three years, partly because of a slowdown in some industries, such as car manufacturing.

Under an agreement with China Merchants to help finance the CEVA deal, CMA CGM would sell stakes in 10 port terminals for $968 million to Terminal Link, a joint venture between the French and Chinese company.

The Terminal Link deal, expected to be finalised in the spring, would be partly financed by a $468 million capital increase by the joint venture and by a loan from China Merchants that would be converted into another capital increase after eight years, CMA CGM said in a quarterly results statement.

The ownership of Terminal Link, in which CMA CGM holds a 51% stake and China Merchants has 49%, would not change, CMA CGM Chief Financial Officer Michel Sirat told reporters.

CMA CGM also plans to raise $860 million from the sale and leaseback of some ships, $93 million from selling a logistics platform in India and another $100 million from a securitisation programme relating to customer receivables at CEVA.

"We have a lot of assets and we use them fully," Sirat told reporters on a call, adding no other divestments were planned in the short term.

The shipping group said it was pushing back financial targets for loss-making CEVA, partly due to adverse conditions in some industries like carmaking.

Medium-term financial objectives, including a target to exceed $400 million in core earnings, or earnings before interest, tax, depreciation and amortisation (EBITDA, were now expected to be reached in 2023 or 2024 not in 2021, the firm said.

A short-term aim to make CEVA cash-flow positive by the end of the year had been pushed back to 2020, Sirat said.

For its third quarter, CMA CGM reported a net profit of $45.4 million, reversing losses posted in the first half.

Sirat reiterated that CMA CGM was seeing reduced activity between China and the United States, due to their trade dispute, and that this was offset by healthy demand on other routes.

CMA CGM expected market conditions to be slightly better next year as an overhaul of vessels to meet stricter fuel emissions rules would reduce availability and support freight rates, the CFO said.

Like its peers, CMA CGM plans to pass on to customers the cost of the new regulations for reducing the sulphur content in shipping fuel, and Sirat said the group expected this to represent on average around $150-$200 per container.