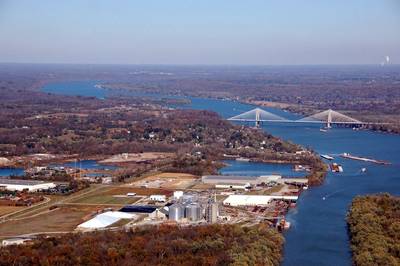 Shipments reached nearly 5.7 million tons and grew by 19 percent at the Ports of Indiana during the first six months of 2017 compared to the same time period last year. The growth, led primarily by increased shipments of coal, ethanol, fertilizer, minerals and steel, marked the second highest volume during the first two quarters of any year in the organization's history.
The Port of Indiana-Mount Vernon's tonnages rose nearly 38 percent over 2016 figures to 3.4 million tons. During the first half of the year, coal shipments through Alliance Coal's Mount Vernon Transfer Terminal were up more than 76 percent while ethanol tonnages increased 39 percent helped in part by Valero Renewable Fuels completing a multi-million dollar port project that improved plant efficiency. The port's fertilizer shipments have more than doubled so far this year due to strong demand during the spring planting season. Mineral shipments increased nearly 47 percent.
The Port of Indiana-Jeffersonville handled nearly 1.2 million tons of cargo during the first six months of the year and is on track for a fourth-consecutive year of exceeding two million tons. Continued demand in the U.S. auto industry has helped keep steel shipments on pace with 2016, which finished with the second highest total in port history. The port has 27 companies on site that provide processing, handling and logistics services for a wide variety of industrial cargoes, including steel, aluminum, lubricants or plastic for the top six U.S. automakers. Shipments of oils were up nearly 26 percent and grain tonnages rose over six percent.
The Port of Indiana-Burns Harbor handled over one million tons with increases in shipments of heavy-lift cargoes, steel, coal and oils. Ship traffic through the port was up 14 percent over the same period last year and carried several large-dimensional cargoes, including wind tower sections from Spain and Brazil as well as the world's largest liquid argon particle hunter, called "ICARUS." ICARUS is the size of two semi-trucks and is used by particle physicists to study neutrinos, subatomic particles that are smaller than any other known particle. ICARUS left the CERN physics laboratory in Geneva, Switzerland, on June 10, arrived at the Burns Harbor port on July 11 and then was trucked the last 80 miles to its final destination in the U.S. Dept. of Energy's Fermi National Accelerator Laboratory in Batavia, Ill. on July 26.
• Brazil • Illinois • Indiana