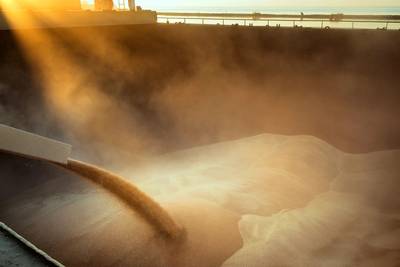 The loading of five cargo ships in different grains ports in Argentina has been stalled for days due to strikes by port workers, the labor union representing the employees and an industry source said on Wednesday.

ADM and the local ACA cooperative have each had a ship waiting since Saturday to complete cargo loading at the companies' terminals in Puerto General San Martín and San Lorenzo, the shipping hub north of Rosario, according to the URGARA union.

Another ADM ship and one for Louis Dreyfus are also waiting to be loaded in the port of Bahía Blanca. The loading of a fifth ship for ACA has been stalled in the port of Quequén since Friday, said a spokesman for URGARA, which represents inspectors who check the quality of grains before they are loaded onto ships.

The URGARA union launched surprise strikes on Monday to protest stalled wage talks, impacting shipments in the world's top exporter of processed soy meal and soy oil, and one of the largest sellers of raw soybeans.

The striking workers have launched work stoppages in some cases and are refusing to work overtime, a union spokesman said.

"We are going to continue [with the protest] for as long as we do not receive a serious proposal," said Juan Carlos Peralta, a spokesman for URGARA.

A source from the agricultural export sector, who asked not to be identified, confirmed the delayed loading of the five ships.

Protests and strikes are common in Argentina's important agro-export sector, a leading global supplier of food. URGARA's protest comes at a time when there is less grain flow to ports due to the planting cycle.