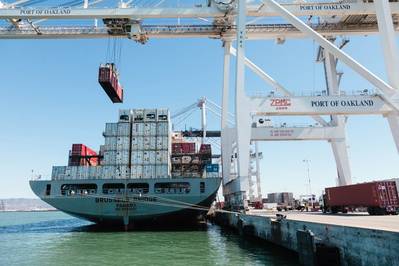 Shippers Transport Express has deal to keep moving boxes away from docks.

The agreement keeps Shippers Transport Express on 32 acres at the Port’s Seaport Logistics Complex through 2032.  The firm transports loaded containers from Oakland’s largest marine terminal to a less-crowded pick-up point nearby.  The Port said the service is essential in speeding import cargo to final destinations domestically.

“Shippers Transport Express hauls 400 loaded import containers off the terminal every night,” pointed out Port of Oakland Maritime Director John Driscoll.  "That frees up space at the terminal for additional cargo and makes it easy to collect those containers for delivery.”

The firm transports import containers away from a terminal where 25 ships a week load and unload cargo.  It parks the boxes on chassis one mile distant so truckers can pick them up quickly day or night.  The benefits include:

Import relocations are part of Oakland’s strategy to hasten cargo flow, the Port said.  Other elements include night gates for truckers to ease daytime crowding and appointment systems for cargo pick-up.  The strategy has cut significantly into truck driver transaction times that once extended beyond two hours, the Port said.

The Port said rent for the Shippers Transport Express property would average $4 million annually.  The Port would spend $7 million paving the land for container parking.