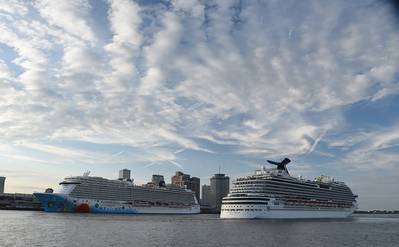 The Port of New Orleans (Port NOLA) set a new record in 2018 with 1,182,111 cruise passenger movements, up 2.3 percent compared to a year ago. A 23 percent surge in guests taking Mississippi River cruises helped buoy the total, with new and larger ships set to sail from New Orleans both in the Caribbean and on the River in 2019.

In 2018, 235 passenger ships called on Port NOLA, compared to 229 in 2017, and momentum and diversification continues to build. In September, Disney Cruise Line announced it will sail from Port NOLA in early 2020. The 2,700-passenger Disney Wonder will embark on a variety of Caribbean and Bahamian cruises from New Orleans – marking the first time Disney Cruise Line will have a homeport in Louisiana.

Port NOLA, the sixth-largest cruise port in the United States, also made headlines in November 2018 when it welcomed its largest cruise ship to date, the 4,000-passenger Norwegian Breakaway, which will sail seven-day cruises through April 2019.  In November 2019, Norwegian Cruise Line will replace the Breakaway with its newer sister ship, the Norwegian Getaway. December 2018 also marked the return of Royal Caribbean International when the 2,050-passenger Vision of the Seas arrived sailing seven-day itineraries through March 2019.