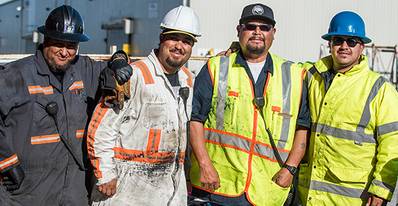 The Port of Hueneme realized record economic growth with indirect, direct, induced and related jobs up 25 percent according to a new Economic Assessment prepared by Martin Associates, a firm specializing in economic analysis for the U.S. port industry. The Report indicates that numbers soared from 10,226 jobs in 2012 to 13,632 jobs in 2015, underscoring the importance of the Port as a major catalyst in Ventura County and the state of California economies.
“The success of the Port impacts the success of the entire region,” said Oxnard Harbor District Commission President Dr. Manuel Lopez. “Together with our customers, our industry and community partners, the Port is helping to create economic successes and provide good jobs.”
The Martin Associates’ study was based on FY2015, where they found that 2,524 direct jobs are generated by cargo moving over the Port’s marine terminals. Direct jobs in the city of Port Hueneme more than doubled, going from 168 in FY2012 to 413 in FY2015, while Oxnard is up 973 direct jobs from 898 direct jobs in 2012. Direct jobs increased throughout Ventura County including the communities Ventura, Camarillo, Thousand Oaks, Moorpark, Santa Paula, and Ojai. The Economic Assessment concludes that 2,651 induced jobs, 1,239 indirect jobs, and 7,218 jobs with the area’s exporters and importers result from cargo moving through the Port of Hueneme’s marine terminals, making the total job count 13, 632. Indirect jobs reflect local purchases from local suppliers of parts and equipment, business services, maintenance and repair services, communications and utilities, office equipment and fuel by those firms directly dependent on vessel and cargo activity at the Port. Induced jobs are created by the re-spending portion of the regional purchases by the 2,524 job holders. Related jobs include users of local retail, wholesale grocery/chains receiving fruit via the marine terminals and local auto dealers selling the imported automobiles with certain caveats as indicted in the report available online.
“This jobs escalation provides a significant boost to local individuals and families, as well as creates outward benefits for the entire County and region,” noted Port President & CEO Kristin Decas. Based on data developed by the U.S. Bureau of Economic Analysis, it is assumed that for every one dollar earned by Port Hueneme area residents resulting from jobs directly generated by port activity, an additional $2.31 of income would be created as a result of re-spending the income for purchases of Port Hueneme area produced goods and services.
On top of the impressive job growth, the Martin & Associates’ new study revealed other important findings. In fiscal year 2015, marine cargo activity at the Port’s terminals supported a total of $1.5 billion of total economic activity in the region. Of that number, $344.3 million is the direct business revenue received by the firms directly dependent upon the Port’s marine terminals and providing maritime services and inland transportation services for the cargo handled at the marine terminals and the vessels calling those terminals. Another key metric measured by Martin Associates was the $93 million generated in annual state and local taxes in FY2015, up from an estimated $69 million in FY2012. These tax revenues help fund vital community services.
Total ocean tonnage handled at the Port’s terminals grew by 271,089 tons since fiscal year 2012, driven chiefly by increases of 93,937 tons in general cargo and 80,422 units of automobiles. Bananas and fresh fruit grew 40,055 and 53,796 tons respectively from FY2012 to FY2015 as well.
“From an economic standpoint, we all understand that maritime trade is important on a global level, but it’s even more exciting to see the direct impact of the Port on our local economy,” added Decas. “Good jobs have the power to drive sustainable economic growth. When the success of our customers contributes to the prosperity of our local community, everyone benefits.”
• California • Kristin Decas • maritime services