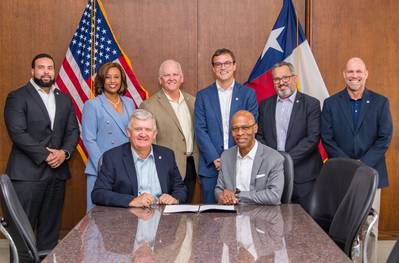 One of the United States' largest seaports announced it is teaming up with energy major Shell to work toward its goals in the areas of sustainability, resilience and carbon reduction.

Port Houston and Shell signed a Memorandum of Understanding (MOU) that outlines a shared intention to explore energy, mobility and decarbonization projects that could be implemented at port terminals. This agreement will help identify new technology and infrastructure opportunities at port terminals that have the potential to ultimately lead to significant emissions reductions.

Earlier this year Port Houston announced its goal to be carbon neutral by 2050 and plans to achieve this by upgrading technology, improving infrastructure and equipment, and utilizing alternative fuels and clean energy sources. The Port Houston Sustainability Action Plan identifies 27 initiatives on which to lead, partner, or support. The agreement with Shell is one of several Port Houston recently finalized to move forward on those initiatives.

“We have big goals at Port Houston, but we cannot do it alone,” said Roger Guenther, Port Houston Executive Director. “The Port Houston team has arranged strategic relationships with several key companies that can help drive us toward our sustainability goals. We will achieve more by working together, and our relationship with Shell is an exciting step forward on our path to carbon neutrality.”

“As the world works toward a more sustainable energy future, this collaboration between Shell and Port Houston will contribute to achieving decarbonization objectives,” said Glenn Wright, Shell Senior Vice President, Renewables & Energy Solutions, Americas. “Building upon our relationship as Port Houston’s renewable energy supplier, we are excited to help Port Houston reach its goal to be carbon neutral by 2050.”

Port Houston reduced its carbon footprint by 55% from 2016 to 2021 through initiatives like the implementation of 100% asset-backed renewable electricity.